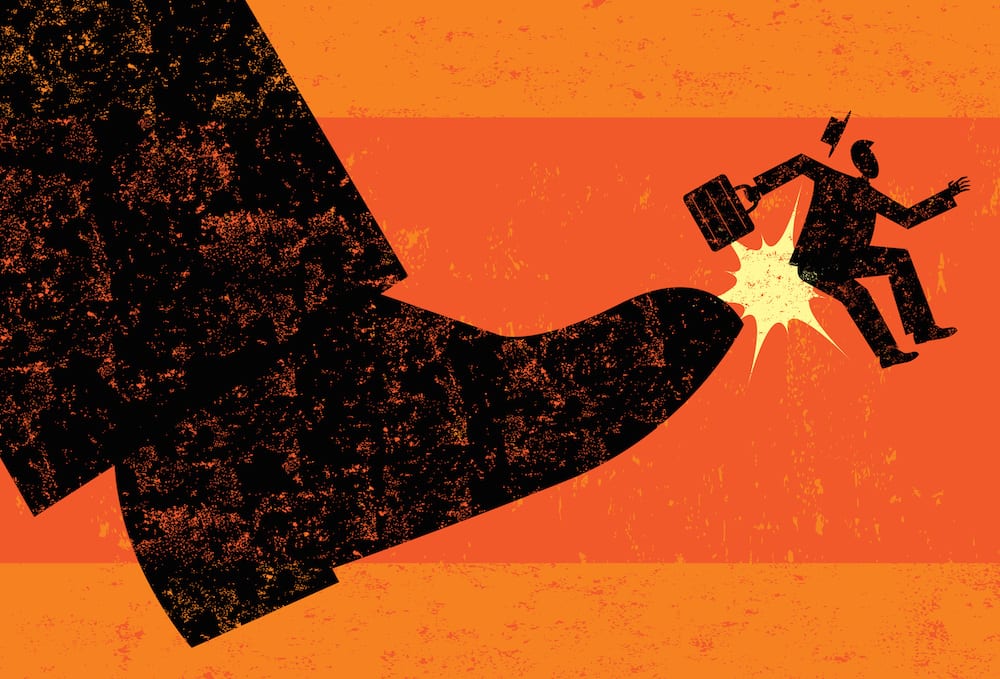 You’d think if you went through the trials and tribulations of launching a startup, you’d at least get to run it.

But sadly, that’s not always the case.

Founders frequently end up losing control of their own startup. It’s sadly something I hear all the time. In fact, nearly 50% of founders get kicked out of the companies they founded or are removed as CEO within 18 months following a funding event.

Even Steve Jobs got fired from his company.

And there are a number of reasons why this happens. Many entrepreneurs, understandably, aren’t experts on legalese and finance-speak, so they (often) sign papers that they don’t fully understand. And there are plenty of investors and finance people who are really sneaky with the contracts and take advantage of even the most knowledgeable entrepreneurs.

In fact, the only 100% bulletproof way to avoid getting fired from your own company is to never give out equity and any control to other parties. Unfortunately, that’s often not possible. Most young companies end up needing external cash injections.

That’s why founders often turn to venture capitalists (VCs) and other investors. But taking money from them doesn’t mean you’re in their pocket. The key is to educate yourself early on and set up your board in a way that’s most favorable to you and your business—not just your investors.

Below are a few small—but vital—steps founders should take at the earliest stages of launching their companies to prevent losing them down the line.

1. Optimize for all terms, not just for the valuation.

The legal and finance sides of launching a business aren’t skills you necessarily learn in “entrepreneur school.” But ignorance in these areas is a major reason founders lose control of their company.

When they aren’t properly educated, entrepreneurs often optimize for the highest possible valuation and/or size of investment round instead of the other terms. Unfortunately, this is often all smoke and mirrors.

And even if they aren’t just thinking about that high number, some founders just get annoyed or frustrated with the paperwork, so they stick their heads in the sand and hope for the best. But if you aren’t careful, slick investors will set unfavorable terms and snag your company before you know it.

If you don’t take educating yourself seriously, you just may lose control of the company you worked so hard to build.

When you’re starting a company, there are times you’re so desperate to get funded that you’ll agree to almost anything—unless you know better.

Investors know that many founders have big egos—it’s one of the qualities that keeps us entrepreneurs going through the tough times. But the truth is, ego can also be used against you. So after learning everything you can about the financial side up front, I recommend keeping a wary eye on would-be investors. They might not have your best interests at heart.

Remember that VCs aren’t the only way to get your company off the ground.

My wellness company, Four Sigmatic, sells drinkable mushrooms. When I first launched, this was almost too radical an idea to lure VCs. So I bootstrapped for years. And at that early stage of the game, it was pretty easy. We were a small operation and a lot of things didn’t cost much—mostly just time and effort. So we hired slowly, grew slowly, sold products online, were mindful of cost, and checked our egos. Maybe we didn’t grow as fast as some of our competition, but we were patient and gave stock options to our employees, which encouraged them to work hard and share in our success.

Alternatively, you could also crowdfund with a site like Kickstarter, GoFundMe, or Indiegogo, or get loans from friends and family more informally. Or try to negotiate more favorable terms with your customers and suppliers.

In other words, don’t feel like you have to agree to an investor’s lopsided terms just because you feel you don’t have other options. You always do.

3. Don’t sleep on shares, board seats, and blocking rights.

There are many classes of shares, and investors usually require a higher class.

Well, not if the shares are worth different amounts.

Mark Zuckerberg had supervoting shares so that his shares were worth more than those of his investors. But Zuckerberg is the exception, not the rule.

Another way you can lose control of your own business is if your investors are able to take control of the board. So even if you own 60% of the company and your investors own 40%, if the investors hold three seats on the board and you just own only two, you might be shown the door.

And if your investors have blocking rights, they could prevent certain decisions that they feel might be detrimental to the business. They could, say, block your ability to raise more money or sell the company. They could also prevent you from making budgeting decisions, or force you to spend money on something against your will. Even if they own 10⨉ fewer shares than you do.

If you control the board and the majority of the shares you aren’t always home free. Investors may still have special rules hidden within the stockholder’s agreement. The most aggressive of these is private equity because if you don’t hit a certain number, the valuation goes down. And, if you don’t hit your numbers, they can fire you or get more money back.

There are many ways investors can legally structure the board to take control. So as a founder, you need to figure out as early as possible:

Even if investors only own 10% of the business, they could have you in their pockets.

When it comes time to negotiate your business contracts, you might hear venture capitalists say, “Let’s use industry terms.” If you hear that, run the other way (or kindly refuse). First of all, most “industry terms” are complete B.S. They’re invented by investors to help investors, not founders.

And they’ll include all kinds of jargon that would make any rookie entrepreneur’s head spin. For example:

To those new to the startup world, it’s all Greek.

Don’t fall into that trap. Instead, seek out fair terms. If you’re a smart entrepreneur, you’ll realize everybody’s in the same boat. You just have to understand that you’re not going to get as high of a valuation as you might otherwise.

As long as you’re not obsessed with getting a crazy multiple on your valuation, you’re more likely to get terms that help you maintain control.

5. Build a profitable business from the beginning.

It may sound like common sense, but the best way to keep control of your company is to avoid starting an unprofitable business.

That means you have to be honest with yourself about what you’re actually able to make off of your product. For example, it’s super trendy right now to start a ready-to-drink (RTD) beverage, like a CBD water or a protein shake. A founder thinks, I’ll sell the protein shake for $4 and it only costs $1 to make—an easy profit.

But it’s hard to sell them direct to the consumer because they’re refrigerated products. And the retailer will charge you chargebacks—anywhere from 25 to 50 cents for discounts and allowances—and then you have to pay shipping. At that point, you’re making only 10 or 20 cents per unit sold, and you haven’t even paid for your team’s salaries, insurance, office space, marketing, etc.

With software products, there’s no initial revenue and it’s a free product. So founders will think of companies like Facebook and Google and assume it’s easy. But in reality, very few companies get to the point where they have billions of users and can start running ads.

The starting point is to make sure you have your numbers right and determine how much leverage you have with investors. Then, you can sacrifice the valuation or the size of the race. Instead of taking $2 million, maybe you just take $500,000 from friends and family. It’s less money, but you maintain control of the company, and you’ll be more likely to spend it smartly.

Before long, your company doubles, triples, or even quadruples your revenue. At that point, it’s much easier to go back to investors with leverage, and say: “Hey, Look what I did with just $500,000.”

To keep control of your own company, it really comes down to this: make sure you’re confident in your ability to understand legalese (or get an advisor who does), ensure your business has legs, and don’t agree to unfavorable terms out of desperation.

Because it’s almost impossible to fix those mistakes once they’re made.