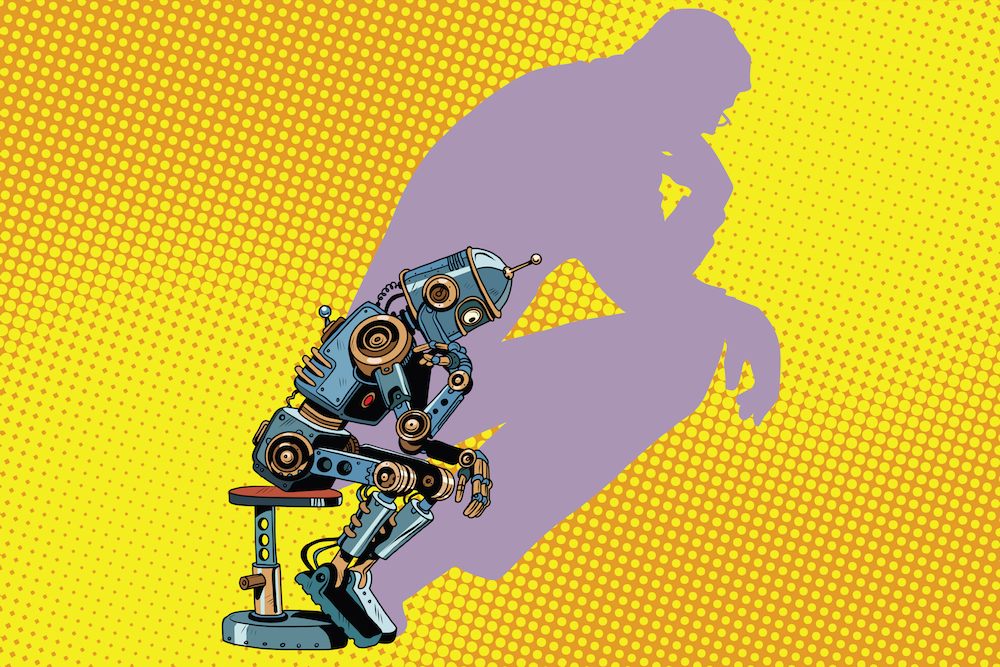 When it comes to AI, there’s a lot of noise out there, but very little clarity.

These days, it’s hard to read any tech news without some mention of AI—but what’s missing is a clear perspective of what AI is and what it isn’t.

Tesla’s Elon Musk believes AI presents a “fundamental risk to the existence of human civilization,” and calls for proactive regulation “before it is too late.” Meanwhile Bill Gates, who believes AI will “allow us to produce a lot more goods and services with less labor,” foresees labor force dislocations and has even suggested a tax on robots.

With headlines like these, it’s no wonder people have conflicting feelings about AI. It’s also unsurprising that fear ranks so high amongst those feelings.

The reality is, when it comes to AI, there’s a lot of noise out there, but very little clarity.

Most people don’t understand what AI really is. If they did, they might not be so anxious about it.

Like any technology, AI comes with potential dangers, but it also has great potential. Specifically, it can enable humans to spend far less time on mundane, repetitive tasks and give them the time to engage with more meaningful work. This would then contribute to a better work/life balance.

There’s no reason to panic. Here’s what people need to know about the reality—and promise—of AI:

People first started talking about AI around the time of World War II.

This was in large part due to Alan Turing. During World War II, Turing served the Allied forces by using automation and machine learning to break the German code created by their Enigma machine. That was the advent of the sort of AI we see now, although people didn’t start using the term “artificial intelligence” until the 1950s. Then, in the 1960s, MIT professors created a computer program called ELIZA that interacted with humans.

But what once required specialized labs, mainframes that were the size of houses, and supercomputers is now deployed onto our mobile phones.

Today, AI is a part of our daily lives, and most of us don’t even realize it. It comes into play in almost everything we do, from driving directions to answering emails. For example, Gmail uses AI-powered filtering to prevent more than 99% of spam from getting into your inbox, and it uses AI to auto-fill replies to emails with simple phrases like “Great, thanks!”

Another example: When we shop online, chatbots recognize words and phrases to deliver helpful content to customers who have common questions. Often, they’re so accurate we think we’re talking to a real person!

In a way, it’s shocking there’s so much pushback to AI, considering all the benefits we get from using it every day.

Not all AI is the same. It’s helpful to think of it in four separate categories.

First, you have what we colloquially call “robots.” This includes things like cognitive cybersecurity, surgical robots, and robotic personal assistants. While it’s the category that makes people most nervous, I’ve personally benefited from the creation of surgical robotics. In 2012, I needed emergency surgery—and a multi-arm robot, The DaVinci, made the procedure vastly less onerous. Had it been done by humans, it would have taken three doctors and three separate surgeries totaling 15 hours. But because it was a robot, I was only under for five hours and had to recuperate just once.

Second, we have the gaming sector. This includes real-time universal translations, virtual reality, and “thought-controlled” gaming. These are emerging technologies people look at and say, “I don’t quite know what’s going on here.” But generally speaking, people see it as more exciting than threatening. Real-world applications also help better prepare workers, such as those headed for work at off-shore drilling platforms, to be better prepared and operate the rigs more safely for both workers and our environment.

Third, we have real-time emotional analytics. This involves being able to detect things like whether a person is lying or is actually going to buy your product. People are wary of this use of AI because it can be invasive and relies heavily on the mining of personal data. Also, it’s not very effective at this point because human decision-making is complex and difficult to detect.

Finally, there’s the AI we use all the time. This includes our mobile phone, chatbots, Siri, Alexa, and other tech we use in our daily lives. Remember having to use a paper map to get directions? Today, Google maps uses artificial intelligence, traffic analytics, and sometimes your camera to provide visual and voice directions. We have all experienced times when you know a better route than a mapping program and you have the free will to go in a different direction. However, this same technology provides you insight you would not have otherwise, like where there has been an accident or upcoming detours and road closures. The convergence of a broader range of information and informed recommendations reduces the cognitive load of decision making for each of us. Then as humans we can make a better decision with technology’s help.

So when people misunderstand or panic about AI, they usually don’t realize just how many forms of AI technology they use each day. Most of which help us rather than pose a threat.

AI can handle the high-tech, but we need humans for the high-touch.

There are all kinds of reasons people fear AI, with job loss consistently near the top of the list.

And these fears aren’t completely off-base. A recent UK survey estimated that automation could take four million British private sector jobs in the next ten years. In the U.S., 47% of jobs are considered to be at a “high risk” of loss from the implementation of AI.

But while negative predictions dominate the press, there are still plenty of reasons to feel positive about the advantages we can gain from the use of AI.

AI is great at handling repetitive, computational and mathematical tasks—like scanning data, computing very complex equations or assembling parts in a factory—but there are a ton of skills that AI isn’t great at, like communication, creativity, strategic thinking, and artistic expression.

It excels at accelerated task completion and automation but struggles with deeply human skills, like empathy, judgment, general life experiences, and relationship building. AI is great at calculating solutions but doesn’t feel or respond to others’ emotions. In other words, AI relies on human insight and expertise to generate desired outcomes that humans find valuable.

Another way to look at it is that if it’s hard for us, like determining the orbital velocity of the moon, it’s easy for AI.  And vice versa: getting milk from the refrigerator and pouring a glass is very easy for us, but very difficult for AI!

And while AI will inevitably replace some jobs, it will create exponentially more opportunities for human growth. Ultimately, AI will handle mindless tasks to free up human employees for strategic, creative, and critical thinking. Recruiters, for example, won’t have to spend time sifting through thousands of resumes. Instead, they can spend time talking to candidates—something AI can’t do. Remember, the human race has been introducing new technology into our societies since the beginning, almost always to the betterment of all.

The goal is to remove burdensome tasks so humans have more time to do the high-value work.

Instead of being afraid of AI, we have to learn how to work with it.

Programming a robot to do simple tasks is expensive.

But there are some uses where it’s absolutely worthwhile. One example is bomb disposal. We have an enormous amount of unexploded devices all around the world that circle all the way back to World War I, and we certainly don’t want people risking their lives to find and dispose of them. Hence, robots are used to clear these bombs out and safely reclaim the lands.

Instead of letting fear take control, we should see AI for what it is: an opportunity to do more with our time and leverage our skills to accomplish new things. Say you’re a librarian and you lose your job because the library is completely digitized. You still have skills that, with a modicum of retraining, you can translate to the tech world, and you’ll end up making even more money.

If you’re resilient, you’ll land on your feet. But this has always been the case. Mankind continues to evolve and so does the workplace. Companies need to be mindful of the great opportunity to retrain their workforce. And employees will benefit from seizing opportunities made available via online training and upskilling courses.

We’re a long way off from AI having the nuanced range of skills that people have inherited. In the meantime, we have to adapt and keep learning how to work with new technology.

After all, AI isn’t going anywhere and will help us go everywhere we want to go…even to Mars.