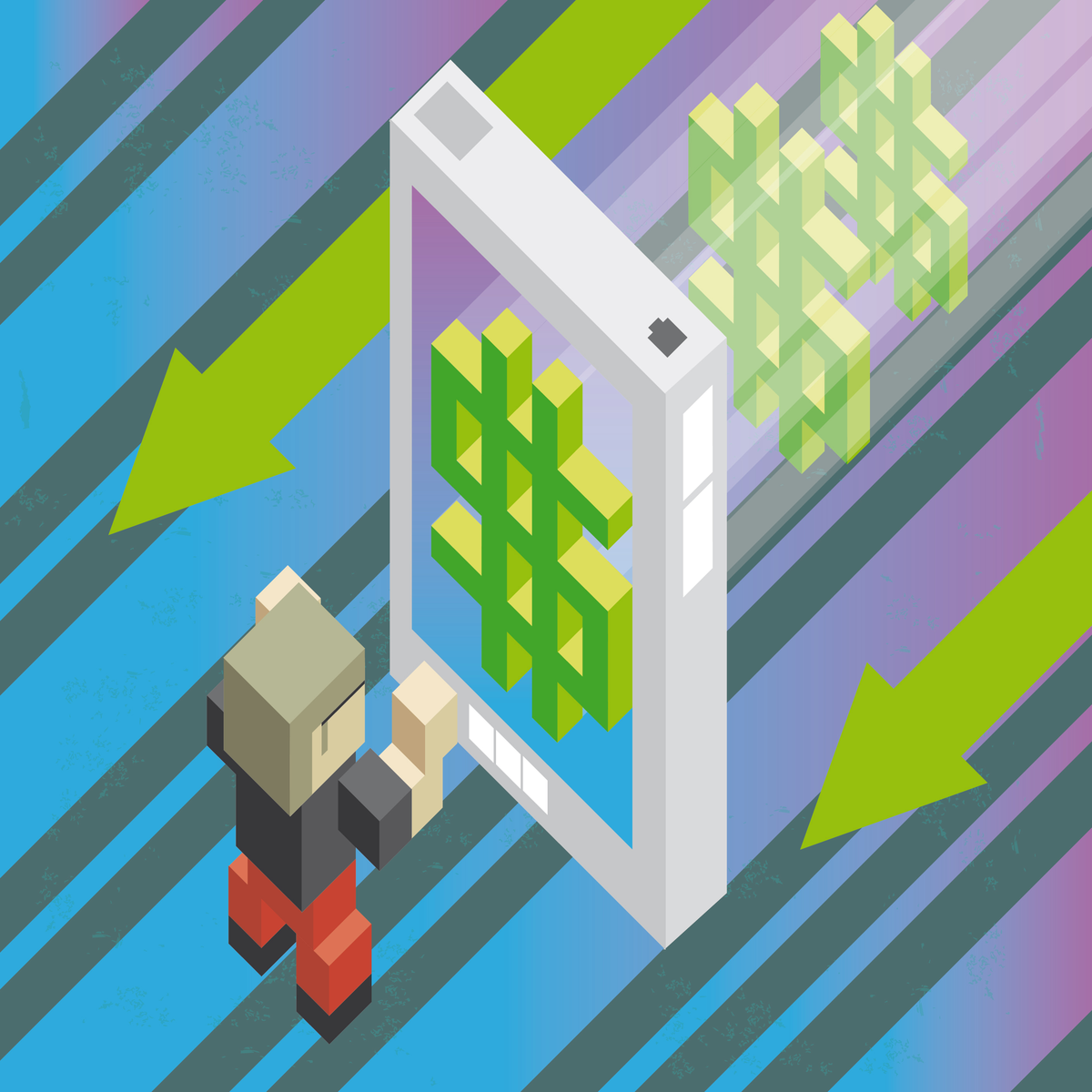 Nowadays, bitcoin and blockchain are buzzwords. Everyone and their dog has an opinion about the technologies, and will quite happily tell you whether to buy, sell, or ignore crypto as a bubble.

This is common to any movement. As it becomes more popular, it attracts a wider range of people.

I believe that many of the people who make up blockchain’s core constituency, however—those who were interested in bitcoin way back before 2011—come from a gaming background. I certainly do, and I see a lot of the shifts that originally became possible in game worlds such as Second Life reflected in the growing functionality of blockchain technologies.

Blockchain can bridge the gap between the physical and the digital.

People who are into games spend a lot of time on computers.

Back in the very early days of bitcoin, this meant they often possessed Alienware hardware with a lot of processing power and powerful graphics cards. These computers had enough juice to do bitcoin proof-of-work mining, at least in the early days. Many gamers also spent a lot of time in chat rooms or on Reddit boards, where they were the first to hear about the latest advances. They were very much into experimenting with new technology.

Another key connection between games and blockchain is that some games habituate players to thinking in ways that can resonate in a blockchain-equipped world. I grew up exposed to gaming. I have two brothers, and one Christmas we all got Alienware computers. (Thanks, Mom and Dad!) We set up a little gaming zone in our basement, until our parents got upset with us for spending too much time online and sent us outside to play. (Why give us expensive gaming rigs if you’re just going to kick us off?) I played a lot of early massively multiplayer online role-playing games (MMORPGs).

Some games involved collecting and trading things, others were adventure games, and still others were “first-person shooters.” The ones that most interested me involved communities of players.

Anthropology was one of the focuses of my multidisciplinary major in college. For my thesis, I wanted to study not a real-world, but a virtual community with all or most of the aspects of a physical culture. At the time, social networks were still somewhat ambiguous, and the chair of the anthropology department thought I was a total nutcase. However, I convinced the department to allow me to live in and do an ethnographic study of a virtual world called Second Life.

Players or inhabitants in virtual worlds like Second Life create avatars of themselves. Having my own avatar meant I was able to follow the standard ethnographic methodology of being a “participant observer”: simultaneously participating in and observing and studying a community or culture. My avatar, Shamwow Oximoxi—named affectionately after the late-night OxiClean infomercials with Billy Mays that I would watch while awake in the wee hours—lived “in-game” in the virtual world for six months while I was doing research. What I found most fascinating in the research was the ability to bridge the digital and physical worlds.

In Second Life, for example, you could build a virtual business. I created a T-shirt shop, Shamwow Shirts, designing digital T-shirts and selling them to other avatars. These T-shirts were entirely virtual, but had real value to the participants in the community, or ecosystem.

The process was fascinating, even though things were a lot more basic then. There was a chat interface—a command-line interface, or CLI—you typed into. Microphones you could talk into were added later. Now, games incorporate virtual reality and goggles that put you all the way inside the virtual world.

In general, the distinction between the virtual or digital on the one hand and the physical on the other is blurring, especially given the amount of time most of us spend on our computers.

Second Life had an in-world currency called the Linden dollar named after Linden Labs, the studio that created the game. Linden dollars had value in the community’s closed ecosystem. Other avatars could use them to buy my virtual T-shirts. Even better, there were exchanges where I could trade the Linden dollars I had been paid for my T-shirts for actual US dollars. I could make “real” money to compensate for the time I had spent designing digital T-shirts to be worn in a digital world!

This was astounding, and it was exciting for me, as an anthropologist, to wrap my head around an economic exchange taking place both within and beyond a closed-loop ecosystem. In Anthropology 101, there is an overused, somewhat clichéd example of the Trobriand Islanders of Papua New Guinea, who use shells as a means of transferring value: paper money is worthless among them.

However, this all bears on the critical issue of the social aspects of how value and means of exchange are developed. We see this throughout history: tea bricks in nineteenth- and twentieth-century China, Mongolia, and Tibet; rai stones in Micronesia from AD 500 to the present; and Parmigiano-Reggiano wheels used as cash in northern Italy from about 1950 until now. Cheese money? You better believe it!

It’s easy to see the link between how something like Linden dollars worked and how bitcoin and other cryptocurrency tokens later came to operate. The behaviors that have developed around cryptocurrency have their origin in the gaming world.

Digital native Gen Z will exert a disproportionate influence on the future development of these technologies.

The world of online gaming continues to evolve, and today’s games make the likes of Second Life look simplistic, as shown by the recent breakout success of Epic Games’ Fortnite. The stereotype of a gamer as a loner without friends, usually sitting by herself in a basement, has been completely disproven. Web connectivity has made gaming a highly social activity. Top Fortnite players like Ninja, the online name of Richard Blevins, have become celebrities, broadcasting their games at considerable profit over the streaming network Twitch.

Fortnite players are not “wasting time.” The game is a virtual community where they’re meeting up with their friends and talking about what’s important to them. They may even use the virtual meeting space as a place to work on school projects or take another player on a middle school date.

This is highly relevant for anyone with an interest in tracing and predicting social movements. The rise of online gaming as an arena for almost every human interaction imaginable looks likely to continue apace, and upcoming generations may be as comfortable in a digital world as an analogue one—perhaps even more so.

As gamers in the Millennial generation, such as myself, were instrumental in the emergence of cryptocurrency and blockchain, we can expect to see gamers in “Generation Z”—the cohort born between 1993 and 2014, who have been raised as digital natives—exert a disproportionate influence on the future development of these technologies.

There are numerous Twitter posts from parents asking, “What do your kids think about crypto?” One answer might be, “My eight-year-old asked us to install Samourai Wallet on her smartphone and demanded we pay for her chores in bitcoin.”

A recent survey showed that more than 50 percent of the Gen Z cohort are or want to be involved in cryptocurrency. Another survey suggests that 43 percent of Millennial respondents trust cryptocurrency exchanges more than US stock exchanges. Fully digital transactions not limited by current boundaries seem a natural fit for these generations.

Generation Z, and to some extent Millennials, have grown up with the web, social media, and handheld devices. They have a completely device-mediated approach to life. They straddle the physical and digital worlds in a way no other generation has.

Companies looking to adopt blockchain will need to win the trust of Digital Natives.

This shift to integrating the physical and the digital has implications for us all, notably the companies who wish to earn the business of members of Gen Z.

It’s not so long ago that the digital world was considered clearly inferior to the physical world. When Millennials like myself were growing up, our teachers still told us, “Online sources are not real sources. You have to go to the library and cite a book.” If I had taken my middle school teachers aside and told them that I would one day write a physical book in which I would cite Wikipedia pages, Twitter posts, blogs, podcasts, and Snapchat stories—just kidding about the Snapchat!—they probably would have had a fit and told me I was spreading blasphemy.

Back then, my teachers no doubt had a point when they said, “You can’t trust anything on a web page.” Now, that advice looks outdated. That’s not to say that the web is uniformly reliable. You’ve still got to be careful now in this time of crazy “fake news.” However, many, if not most, web pages are relatively trustworthy, and few of us now balk at entering our credit card numbers on a web form, which was once thought to be dangerous.

Caution is, of course, always warranted, but today’s high schoolers are very tech-enabled and comfortable with digital services. Their outlook is connected and globalized. They’re able to communicate with people all over the world and have grown up with that expectation.

Gen Z and Millennials have also seen the dark side of global connectivity and the trust gaps it causes. They’ve come of age in an era of fake news, recessions, and brands greenwashing their products, making baseless claims for marketing purposes. They understand that not everything in the offline world is rosy and recognize that sometimes the digital world offers solutions that would otherwise be unattainable.

Given that Gen Z will make up 40 percent of all US consumers by 2020, it is imperative, if they want to remain competitive in this changing landscape, that companies invest in solutions that establish trust. Those that fail to comprehend the value and meaning of the digital landscape to members of Gen Z will likely struggle to win their trust, whereas those who embrace the juxtaposition between virtual and physical worlds, including technologies such as blockchain and bitcoin, will be well-positioned to thrive.