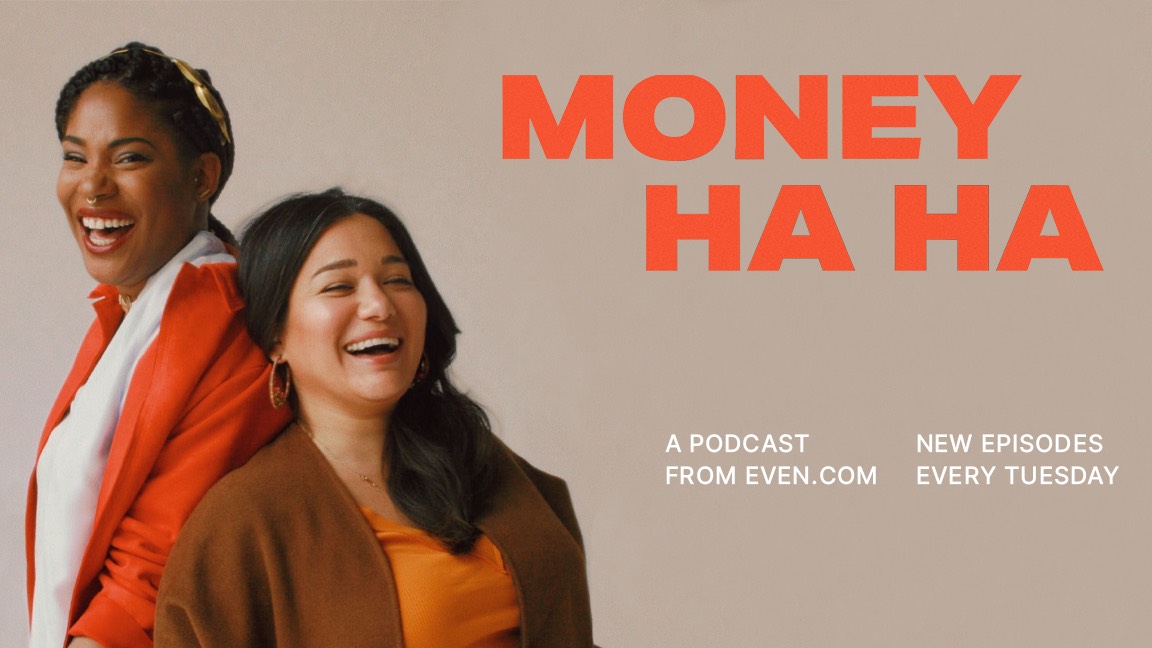 There’s an old saying that you should never discuss money, religion or politics over dinner.

Usually, because no one wants to deal with the headache that accompanies intensive disagreement over deeply-rooted personal beliefs—no single person can really be “right” about politics or religion. Money at least would be a slightly more objective topic to engage with over the soup and salad course were it not steeped in layers of societal and personal shame.

We hate talking about money. It’s overwhelming, it’s scary, it’s emotional. When we don’t have it, we’re ashamed. When we do have it, we’re embarrassed. And never mind what happens when we’re bad at managing our finances.

Which is why Dara M. Wilson and Yasmine Khan are stepping up to the podcast plate to put honest and straightforward money talk on the table.

Money Ha Ha is a production of Even, a company that specializes in partnering with corporations to provide greater financial wellness resources to employees to end the paycheck-to-paycheck cycle. Wilson and Khan both work at Even, the former in marketing, the latter as User Experience Research Lead. Wilson had been working with Jane Leibrock, Even’s brand director, on new media options to encourage deeper engagement around financial wellness. When it was discovered both Wilson and Khan were also Bay Area local comedians, it sparked an idea for a podcast.

“We heard inklings of Yasmine joining the team and everyone who knew her previously was like, ‘Oh my gosh, she’s going to be amazing,’” says Wilson. On Khan’s first day she met with the marketing team to talk about a podcast and agreed to give it a try.

In crafting their show, it was important to both Wilson and Khan that they look at money and finance in tandem with all the contributing factors influencing how it’s used. This means their conversations very frequently dig deep into social justice, socioeconomic disparity, and the emotionality around the purchases we make every day.

I was lucky that both Wilson and Khan were willing to meet me early one morning in their Oakland office to talk about the podcast, shame, and why humor when dealing with heavy topics is so important.

Minutes: You guys just did an episode around shame. Why do you think it’s important people understand there is shame around the way we make purchases and there doesn’t have to be?

Khan: People are more comfortable talking about their sex lives than they are talking about their relationship with their credit card and their bills. Realizing it is such an emotional topic, and often times when people are trying to problem solve in this space, “We’re just going to pull out a calculator, and a spreadsheet, and we’re going to make a budget, and that’s all there’s to it.” If it were that simple we would all be fine. We would have really simple ways to advocate for ourselves. [But] it is an emotional relationship. The same way your relationship with food is emotional. By attacking that side of it, [it’s] our strength as women too. We don’t shy away from our feelings. [Dara and I] have a lot of, I think, emotional intelligence about who we are and what our personal journeys are, and so we can talk about feelings and the relationship with money. Which I think is the crux of a lot of people’s struggles with money, because you’re often making decisions you know aren’t purely rational.

Wilson: I think what Yasmine is saying is 100% true, in that, so many financial solutions try to divorce themselves [from] the emotionality around the topic of money and personal finance. There is a desire in tech specifically that in order to scale things you have to take emotion out of it, and that is just not the reality of the human experience. You are building things that are set up to fail because they’re not set up in a way to integrate into actual human lives. I feel like at least in part, we can start tackling that, so it very much fits in with the Even brand. To try to come up with a solution or a part of a solution that does take that emotionality into account.

Minutes: What would you guys say, in each of your backgrounds, contributes best to the advice that you’re giving in these podcasts? Why are y’all the experts?

Wilson: I think, for my part at least, I’ve been a student of the political and sociocultural landscape since I knew what any of those words meant. I spent a good deal of time, especially after the election, being really deeply involved in that world, in the activism space. That’s why I think, even outside the personal finance context, I have in my head all the time, this larger understanding of the way that the world works, and the way that gaslighting is used to keep marginalized people marginalized.

Khan: I think we’re similarly minded in terms of always being more socially, and politically, involved and aware. I think a lot of what informed my experience was trying to be an art teacher, and not being able to get full-time work for several years. Having this really expensive Masters degree at some point in that time span. My family lost their home during the financial crisis. I had a lot of difficulty figuring out where my next meal was going to come from, and how I was going to pay the rent, and just living. it was a very different life than the one I grew up with. There was a lot of volatility there.

Minutes: You’re bringing all of these heavy topics to the table, but you’re also adding in some humor. Why the balance?

Wilson: If you are a participant in or a marginalized member of a structure, it is not always enjoyable to hear about how that is affecting your life. I think if you are a marginalized person or repressed in any way, humor is the most important. I think being humorous is being in the service of other people. Beyond us actually giving practical knowledge, and tips, and personal experience on how to become financially well, I also think it is like a service. Trying to, for 25-45 minutes a week, or twice that, to feel better for a little bit. We want people to feel better.

Khan: I think we naturally, it’s just easier to have a conversation when we have license to be funny about it. It promotes healing. Your brain needs some way to think about this. You see all the time, people just don’t think about things that are stressful, and humor gives your brain a bit of a pathway to a safe conversation. We can do this. It’s not going to just be total shutdown and shame.

Khan: I think maybe the thing we want to put out is we’re not being jokey about this because we think it’s stupid. The jokes come from a respect and a reverence for the difficulty and the severity of it all.

Wilson: From our own experience and the experiences that we have collected from the people around us. We’re not two ladies on high.

You can hear more from Wilson and Khan on Money Ha Ha, which releases new episodes every week on Stitcher and iTunes. Follow them on Twitter @yasmineakhan and @DaraMWilson.

This interview has been edited and condensed for grammar and clarity.