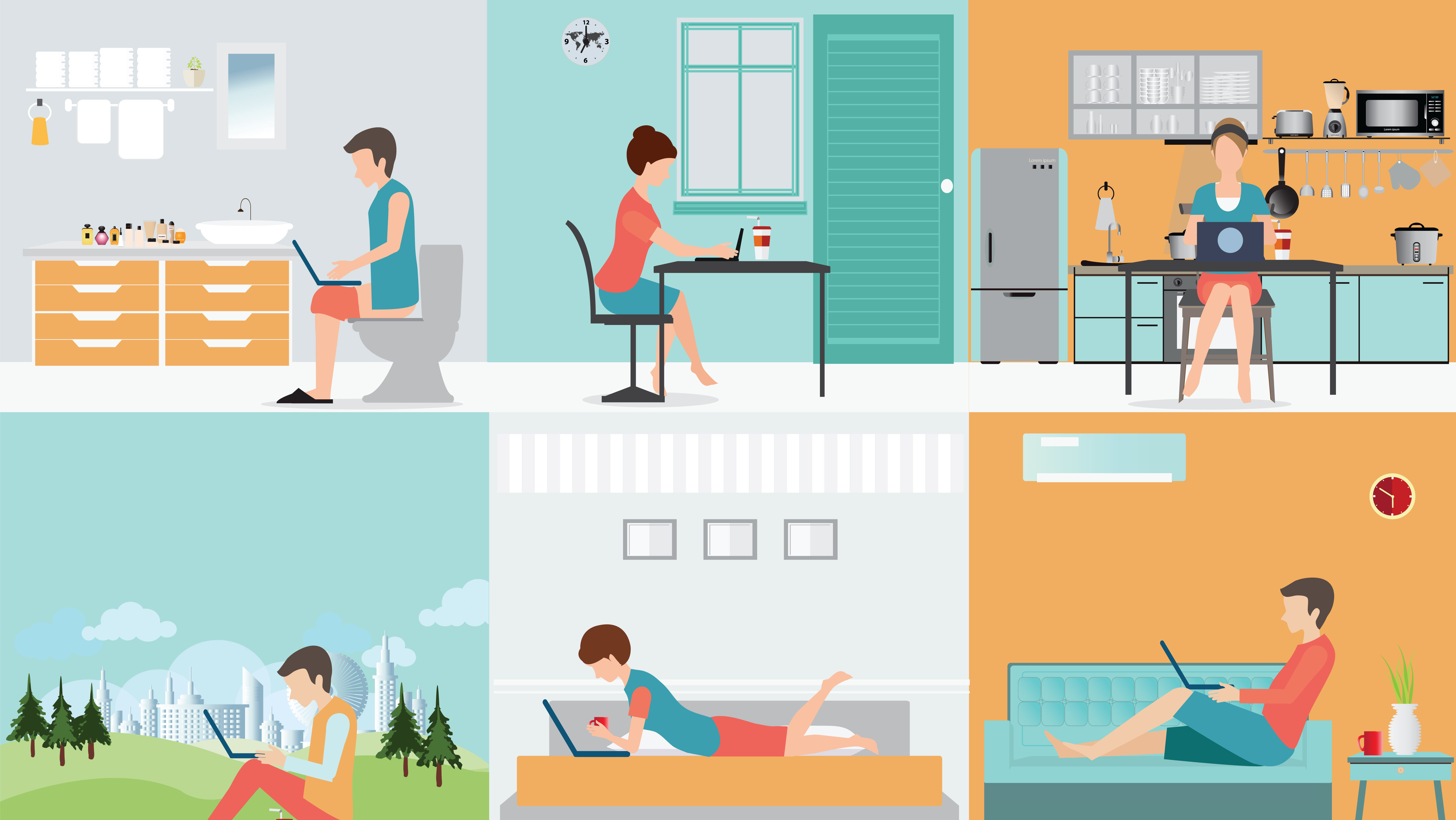 Because everyone in-office is communicating via Slack anyway.

My day job entails answering e-mails, attending team meetings, and writing articles. If it sounds like your typical 9-to-5, that’s because it is—all except for one slight detail: I work from home 100% of the time, and yes, more often than not, I’m in yoga pants and a T-shirt.

Up until recently, work-from-home privileges were reserved for part-time employees and those who spent 30-some-odd years proving themselves at the firm. Now, forward-thinking companies (like the past two I’ve worked for) are trusting select people to perform 40-hour workweeks from anywhere. The roles even come with benefits, regular paychecks, and paid time off.

First, a disclaimer: I am not making the argument that all companies should sell their office space and operate in some technological ether (though some companies do).

For my first remote role, I’d met my in-office coworkers in person a grand total of twice, and one of those times was for the interview—but that doesn’t mean that my managers didn’t know my work, or trust me. I spent a long time paying my dues, and I eventually proved that I could meet deadlines, perform my responsibilities, and remain reachable during business hours, all from a laptop in my apartment.

Hiring someone to work off-site is, in so many words, a privilege. It takes a certain job description and a certain personality to flourish in that environment. But it’s a privilege that more companies should consider implementing for these reasons:

You’ve likely heard the saying that a company is only as good as its employees. Some businesses tack quotes like this up on the bulletin board and call it motivation, while other businesses actually implement it.

Google and similar front-runners have expressed the importance of employee freedom. They’ve proven that a feeling of self-sufficiency among employees doesn’t just equate to happier workers—it also equates to higher-quality work. Designated creative time and a healthy work-life balance have led to some of the most innovative ideas and inventions in Google’s history.

Yes, many companies also offer in-office perks (like free food, hangout areas, and even massage therapists). But for someone like me, those types of social-based activities aren’t motivators; they’re distractions.

Research has shown that those who work in offices with open floor plans are often less productive due to noises, fixed environment factors, and a general lack of privacy. Ironically enough, research also shows that human collaboration actually decreases in an office setting due to workers’ attempts to “tune out.”

In other words, in an effort to focus despite all the so-called perks, they throw in earbuds and message each other on Slack — which is exactly what I’m doing from 40 miles away.

Ultimately, studies show that autonomy in one’s work is the biggest indicator of well-being and job satisfaction. That should include autonomy over one’s work location. In lieu of food and massages, I’d much rather the freedom to work in a quiet, private space; to recollect myself during my lunch-break however I find most effective; to throw in a load of laundry before my conference call. All of these things help me to feel productive and centered.

Most importantly, knowing that my employers trust me to work hard without surveillance makes me want to produce genuinely great work for them.

2: It’s Cheaper For Everyone Involved.

More and more, we’re hearing about companies who opt to outsource to other countries to cut down on labor budgets. This is predominantly due to the fact that foreign workers will often accept lower compensation rates. But it’s also because, if a company’s employees are in another country, they likely won’t have to cover certain overhead costs, benefits, or events.

If companies were to begin hiring remote team members, they could provide jobs for workers in their own countries while still managing to cut down on company-wide costs.

Benefits will likely still be factored into the budget (as they should be), but businesses could cut down on their office space and utilities. They’d also have to provide fewer snacks in the kitchen and a lower budget for workplace activities. The employees themselves could save on commuting expenses, wardrobe purchases, and lunch costs.

Finally, most large companies are based in large cities, where salaries need to be higher in order to be considered “livable.” If jobs were to grant certain employees the opportunity to live anywhere without the limitation of work radius, employees could survive and flourish off of a much lower income.

They could afford a mortgage upstate with what they’re currently spending on rent in New York City. And that’s without a raise.

Work-from-home schedules used to be reserved for people who had paid their dues for the better parts of their careers.

But even decades ago, some employees managed to do all their work from their home-offices using a landline, dial-up internet, and the US Postal Service. Now, due to the technology that exists, it’s essentially like we’re in-office with the rest of the team, just with the ability to disconnect from all the distractions.

But how could an employee possibly perform well without direction, especially in the beginning?

For my current role, I underwent absolutely all of my training remotely, and put simply, I was never without direction. The internet and subsequent technologies have made it possible to conduct trainings in digital meeting rooms, host company-wide brainstorms via messaging software, compile everyone’s ideas simultaneously in a spreadsheet, house thousands of employee workbooks in one cloud…

And, if I have a question, my manager is one phone call, e-mail, or instant message away—which is how most of my in-office coworkers communicate with their managers, anyway.

Given that most companies’ data and means of production are accessed digitally, an employer shouldn’t need to physically stand over an employee’s shoulder to ensure that they’re working and advancing.

If a remote worker is absent or slacking, the red flags will be there and easy to see, same as any other employee.

4: Companies Are Currently Limiting Their Options.

While we’re often told that employees are dime-a-dozen, that’s only partially true.

Yes, there will always be someone who’s willing to take your job when you leave—but does that necessarily mean that said person is the absolute best option? When companies elect to hire within a set radius, they could be missing out on a candidate who is truly qualified for a niche role, not to mention a harder worker.

Global surveys have found that work-from-home schedules are extremely productive, but they may also attract the type of person who can help a company succeed and expand.

According to past studies, introverts are actually more successful than extroverts when it comes to leading a team of passionate employees. This is because of their thoughtful, non-dominant approach. Additionally, science has found that proactive people (read: workers who don’t require as much direction and would therefore flourish in a work-from-home environment) are typically more innovative and knowledgeable employees.

A desire to physically separate yourself from busy environments doesn’t indicate an aversion to work or connection. Instead, it usually means a self-sufficient, innovative employee who knows how to lead without stepping on anyone else’s toes.

5: It Conserves Time And Effort For The Things That Matter.

Last but not least, there’s the notion of wasted exertion—which brings us to the dreaded commute.

Surveys show that traveling to and from work each day is people’s absolute-least favorite activity, and this includes chores and actually working. Science also reports that commuting every day negatively impacts workers’ health and productivity, and most employees aren’t even getting compensated for it. Instead, they’re paying hundreds of dollars a month to do it.

If people are already frustrated when they show up to the office, it’s not likely to positively influence job performance.

Personally, commuting slows me down both physically and mentally. Instead of dealing with stressors like train schedules and parking lots before my day even starts, I can hit the ground running as soon as I’ve had my morning coffee. I’ve always told my freelance clients, “Sure, I can come into the office for a trial if you feel you need to keep an eye on me—but my door-to-door commute is two hours there and two hours back. That’s four hours a day that could otherwise be spent working for you.”

Also consider the time and effort remote workers save because they don’t have to choose a daily outfit, put on makeup, or worry about how others regard them on a surface-level. Given that 65% of in-office communication is centered around gossip, perceived-image can be a major drain on someone’s focus and productivity levels.

When I’m given the opportunity to work remotely in a role, all of my effort goes into my work, which then becomes the primary deciding factor of my value as an employee.

And that’s exactly how it should be.

Maria Cassano is a staff writer for Digital Press, as well as a commerce writer for Bustle Digital Group. Her freelance work has been featured in over 15 publications, including Allure, Thought Catalog, Elite Daily, The Zoe Report, Mic, and Lonny. She has a BA in English from SUNY New Paltz and also studied writing at Ursinus College, where she became a certified writing tutor and placed in UC's Creative Writing Award. Since writing is her passion, the lines between work and play are often blurred — but when she's not on the clock, Maria can be found traveling, playing guitar, gaming, baking, and planning her next home renovation project.