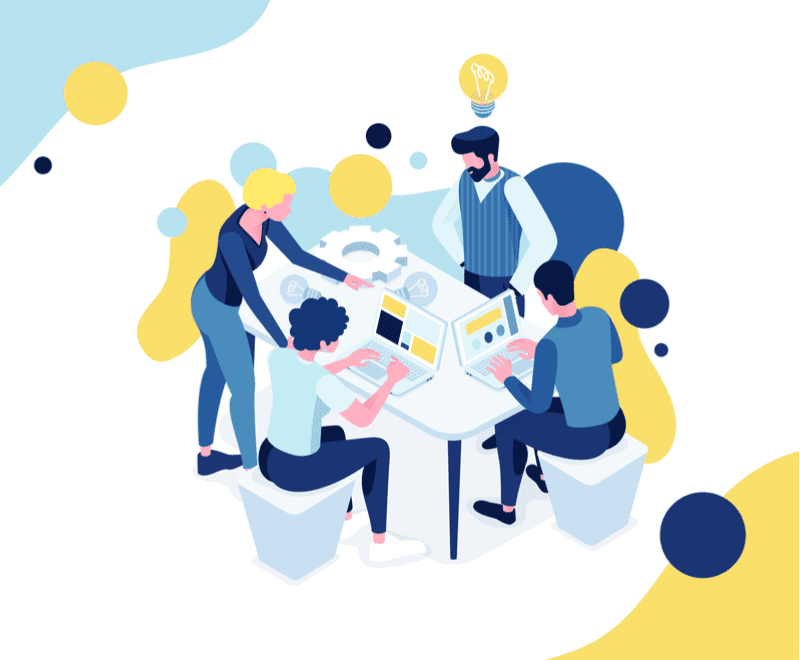 One of the biggest misconceptions about agile coaching is that, as coaches, we’re “product delivery problem solvers.”

But in my 10+ years as an enterprise agile coach, I’ve learned that the problem is very rarely the product delivery itself. It’s the team. And what keeps company product delivery from being smooth, well-managed, and effective has far more to do with the underlying interpersonal issues clogging workflow in the first place.

For example, one of the startups I work with as an agile coach is 100% remote. Everyone is distributed across the country far away from one another, which means they don’t get the opportunity to work “together” every day. Recently they did an internal survey to find out what employees felt were “major issues” for the company, and the number one answer was loneliness.

That might seem entirely unrelated to “improving product delivery,” but you have to remember that team members are humans. They bring emotions into everything they do—including work. And when those tender things get blocked or restrained, it exhausts a significant amount of energy that could be used more efficiently during the workday.

Here are a few exercises I’ve found to help bring underlying issues to the surface while promoting inter-team collaboration:

For your team to work at its absolute best, you have to be willing to “stare” feelings in the face.

I like to have teams break up into pairs and then have each pair make direct, unbroken eye contact with their partner for 60 seconds.

If this sounds uncomfortable, that’s because it is.

I frequently see people say, “Okay this is too much,” and they have to stop—which is okay. I give them 100% permission to do that if they need to. But I also remind them their discomfort is something to be curious about. Here they are, building a startup together, but they’re challenged by staring into one another’s eyes for 60 seconds. What else could be possible if they could see each other more holistically?

Everyone has an “on stage” person. This is the version of ourselves we expose to the world.

Very rarely do others see the “backstage” person—the real us.

But maintaining two separate personas like this is draining. It’s exhausting to think about which mask you have to wear at work today, or which parts of your personality are “okay” to show other people. And many times, the things we keep secret don’t need to be guarded in the first place.

The #NoSecrets exercise is about closing the gap between what we present to people, and who we really are. I ask team members to pair up with someone and disclose one secret they’ve never told anyone else that they’d be willing to share.

This accomplishes two things: it frees up energy in the workplace, and it initiates problem-solving.

For example, I might say, “Look. I’ve been sneaking out at lunch to do 30 minutes of gym time. I’m afraid of getting fired if I tell anyone about it.” But when I confess, it turns out the team is completely understanding of wanting to take a mid-day break, and there’s no reason for secrecy. And as a result, I free up energy toward other things (rather than hiding an activity), and my teammates get to know me a little better.

3: Sitting With Emotions To Discharge Them

Another waste of energy at work is suppressing emotions, which is what we usually do when we experience shame, anger or jealousy.

The question is, how do we actually experience those emotions in a way that’s freeing? Where we can let go of them, metabolize them?

One way is simply sitting with them physically.

In this exercise, I ask team members to think about an enjoyable situation. I ask them what feelings that situation invokes and where those emotions show up in their body. Maybe they feel relaxation is in their legs, or joy in their chest.

Next, I ask team members to do the opposite and think about an unenjoyable situation. Maybe it’s when your boss is yelling at you, which triggers tension in your throat.

Most of us don’t realize how we naturally react this way to stressful moments throughout the day, and often want to distance ourselves from these types of feelings, and block them off to make it stop.

So during this exercise, what people are doing is sitting with that tension—just for a moment. They have to feel it, and pay attention to what other feelings come up along the way.

To complete the exercise, I say, “Now let’s go back to your enjoyable moment.” And together, we switch back and forth between relaxation and tension, which helps process the emotion actively and purposefully.

4: One Answer On A Sticky Note

One simple question I love to ask everyone is, “What are you optimizing for?”

Teams almost always give me some off-the-cuff answer with little thought. “I want this, I want that, these are my goals.”

But remember: you’re optimizing for one thing, not twenty. And in order to figure out our single most important metric, I lead groups in an exercise that narrows down those twenty needs to one.

We start in silence.

I ask the question, “What are we optimizing for?” In order to avoid a flurry of shouted answers (and potential disagreements), everyone writes their individual answer down on a sticky note. Depending on the scenario, we’ll either process all of the sticky notes together, or we’ll pair up and two people will talk to each other to create a single combined answer. And we’ll do this in bigger and bigger groups until finally there’s a single statement everyone actually agrees on.

The number one reason startups fail is they have founder conflict.

Founders tend to have different ideas of what “good” looks like—meaning what workflow is effective, how people are meshing, the rate at which tasks are accomplished. They frequently hold on to the “good” from when they were in the dorm room, coding together at the beginning of their company. But what’s good for a company in its beginning phases doesn’t remain “good” 10 years down the line—and founders sometimes fail to recognize how things have changed.

I bring them back to earth with Legos.

In this exercise, I’ll give teams five Lego pieces and ask them to build a car. They’ll do it instantly. After that, when they’re confident they know the most effective way to build a Lego car, I’ll give them 500 pieces to do it again. Once they get started, the teams will notice they can’t accomplish the same task in the same way with more parts—they need an entirely new plan.

And building a company works similarly.

If you have five people in the company, you know everyone’s names, their needs, their wants. When you have 500 people in the company, things change. You need to establish infrastructure and processes that accommodate growth. The Lego comparison really drives home the fact that different situations require a shift in mindset and management. You can’t cling to what things “used to be,” or you’ll never move forward successfully.

How we communicate can sometimes cause more problems than it solves.

You may be asking for help, but the way the other person hears it, you’re just giving an update. Or worse, you may need to make a decision quickly, but the decision maker doesn’t feel your sense of urgency.

Because of these common mixups, one of the most important exercises I do is around creating syntax standards.

I’ll work with teams to create a specific piece of text to use in certain situations—most frequently when asking for help or for a decision. Language signifiers help clarify the intent of the conversation, saving time and energy for all parties. People will be able to think, for example, “Whenever I need a decision from anyone in the company, it’s going to have [DECISION] in the subject line of the email.”

It simplifies a daily need to the point of lightning speed, making the team collaboration—and the company—considerably more agile.

This article originally appeared on Crunchbase.