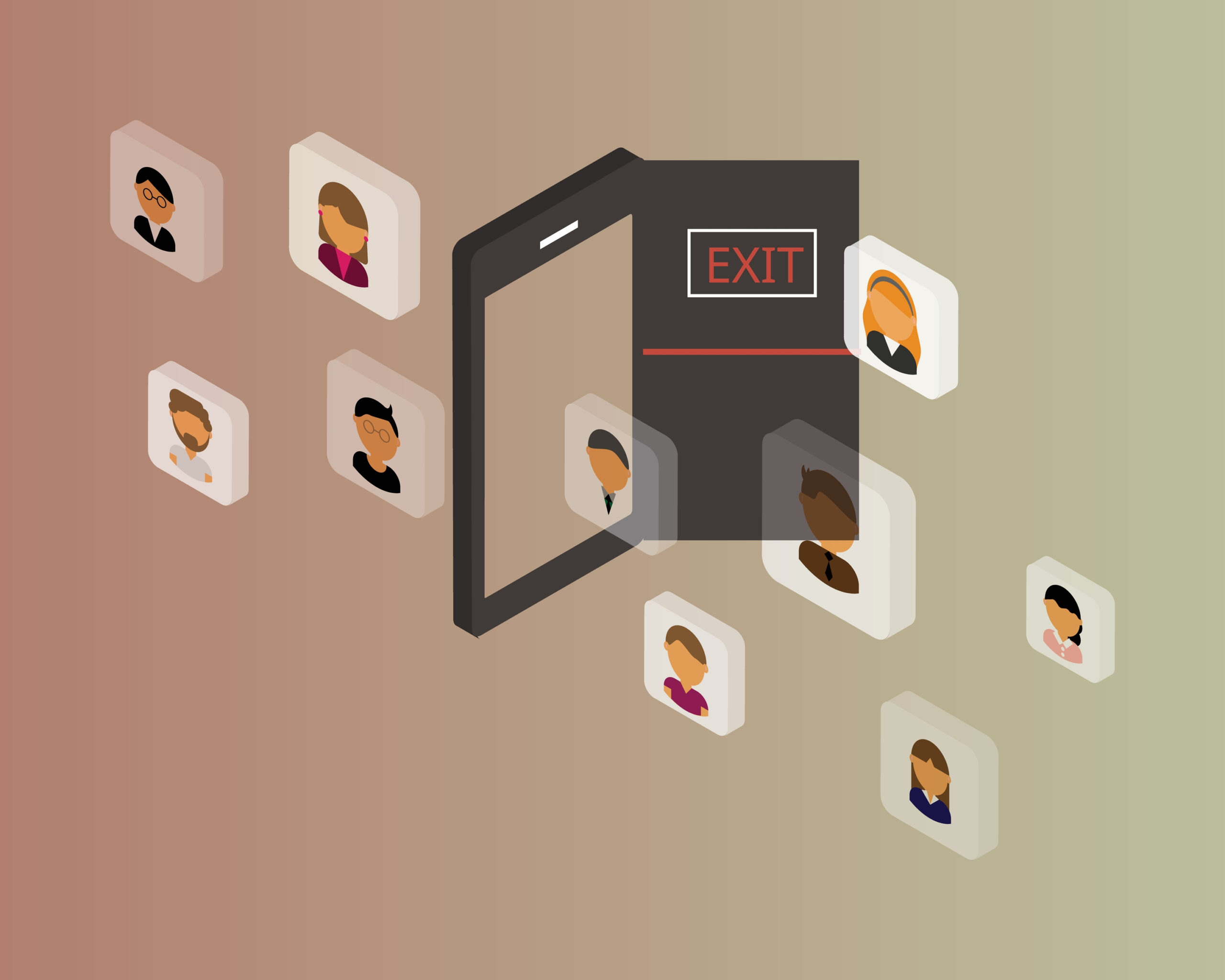 In this time of the “Great Resignation”, many knowledge workers have the luxury of options and feel their “stock” rising.

In response, there isn’t a single leader I know who isn’t thinking about retention. Leaders are taking note of who’s leaving, of who’s staying, and ultimately trying to understand the “why” of both populations. An unexamined first instinct might lead you to believe this:

No one would agree with this model if they spent two seconds thinking about it. It’s overly simplistic, and yet we often interact with employees based on this understanding. We expect if they’re not complaining or leaving they’re ok. If they working on quarterly goals all is well. We expect them to get excited about the company trajectory as if they were owners of the company themselves.

In reality, engagement looks something more like this, with a spectrum of emotional states amongst current employees and alumni:

Within this model, there’s a particular population that’s worth paying disproportionate attention to. And that’s your pre-turnover population. Your current employees who are in some way unhappy or craving something different/more.

A survey from PwC, polling roughly 1,000 U.S.-based employees in August, found that 65% were looking for new jobs. Those are people currently inside your organization who have one mental foot out the door. That’s a pretty sizable pre-turnover population.

Interestingly, it’s not only the people who are unhappy or burning out that need support. It’s also the people who are lighting up. The ones who are seeking ever more meaning, the ones who have found new skills, who want to dive even more whole-heartedly into their work, the ones who have more to give. It’s a hopeful kind of dissatisfaction, but dissatisfaction nonetheless. Sometimes, we need more rest to feel human; other times we need more action, more trust, more opportunity.  Or frankly, if you have more to give and you’re a top performer in a hot job market, the opportunity for better pay doesn’t hurt either.

Many people can continue to perform whether or not they’re burned out, or feeling unfulfilled, or regardless of what’s going on in the world around us. It wasn’t that long ago that we in the US worked through a coup, after all. But though people can carry on, they will start to reevaluate whether they should.

So, what should leaders do?

1. Normalize the ups and downs

Not to be confused with the sentiment of “work sucks, get over it.” Because I firmly believe it doesn’t. Or shouldn’t, at least. But it is true that not all minutes, weeks, months are equal in terms of joy. At some companies, employees feel compelled to always say everything is okay—that they are okay—because showing signs of tiredness or disenchantment is often mistaken for signs of weakness or incompetence. At other companies, people feel compelled to parade their burnout as a sign of their necessity—because a day packed with Zoom meetings means others are clamoring for their presence. Neither organizational culture is healthy.

When talking to your team, make time to ask, “How are you this week? What’s great? What’s hard?” and validate what you hear (“Ugh, yes, that is really hard,” or, “Sounds like that project is really lighting you up!”)

You can also normalize the ups and downs by leading by example: sharing something that’s been difficult for you that week, or resisting the knee-jerk “I’m good” when someone asks you how you’re doing.

It’s also helpful to know that your manager is also a human who has their own career reflections and aspirations. This isn’t the moment to “steal the show” and make it about you, but rather, as these conversations unfold, to share that you also actively think about how your career might evolve. It’s infinitely easier to open up to someone who you feel truly understands because they’ve been there themselves. Be their companion. Show that they’re not alone.

For many roles, the “next” step is an obvious advancement up the ladder (e.g., from manager to senior manager). But it’s also possible someone might be interested in a new role entirely, a new function, or a different set of responsibilities within their current position. Figuring out what’s next is an ongoing discussion and one that will likely evolve over time. But if you genuinely don’t know what a person wants next in their career, and especially if they don’t know, they’ll no longer feel the organizational wind in their hair and they’ll stagnate. It’s also possible that you think you know what an employee wants, but it’s always good to check your assumptions. This may sound like, “What’s your favorite part of your role today? How might we get you more of that in the future, in your current role or your next?” In some cases, especially if someone is burning out, “next” might look like a lighter role, a part-time role, or taking some leave.

(It’s worth noting that not everyone needs a “next”—for some people, holding steady at work is just right for them. These people fall within your “current employee smiley faces” and don’t represent a retention risk.)

3. Know if and how that “next” would happen for the people you lead

If there isn’t a role or a set of responsibilities for a person to grow into (maybe you hold the role they’d grow into and there’s only one of those, maybe the business doesn’t need the role they’re imagining) then the logical conclusion for that person is to look elsewhere. They’ll reach a similar conclusion if there isn’t a model for someone to slow down or safely take a leave. This step doesn’t have to be an exercise in immediate problem solving—many times there are no easy answers. Instead, it might be an exercise in exploration or invention—what a business needs is rarely as clean-cut as its job descriptions. If nothing else, what your people are looking for “next” is critical to share amongst leadership and specifically your People Team. What trends are you seeing in what people are yearning for?

To this end, at SYPartners, we’ve adopted a ritual called “Growth Planning”. Once a year, our People Team leaders meet with every manager individually, carving out dedicated time to review each and every individual employee. This isn’t merely a performance review exercise—it’s a “next” conversation. We think about each person’s engagement, their potential for burnout or turnover, what lights them up, their strengths, unique skills and opportunities to support them. If this sounds like a lot of time and meetings, well it is. But we believe it’s well worth it.

From a practical standpoint: consider the value of a 15-minute conversation against the cost of an employee’s total compensation and it becomes a no-brainer to make sure each person is thriving. From a philosophical standpoint: it’s an act of respect—of believing each person’s bank of days on this planet are limited, and they should be filled with meaningful work.

4. Open the conversation about leaving the company without judgment

Most restless employees will first try to make the situation better at their current company, sharing their desire for something different. But one day, that may stop. A manager might start to think that the person is happy again—that their concerns sorted themselves out. Oftentimes, what’s actually happened is that the person has given up hope, has started looking elsewhere, and figures it only disadvantages them for the company to know, lest the company find out and let them go, take them off projects, or otherwise think poorly of them. The truth is, there’s no reason why a manager can’t be a guide for employees both as they come into a company, and as they leave it. While being a manager can sometimes feel like playing the role of “double agent”—looking out for both the company at large and the individual—only good can come from de-stigmatizing exits. Wanting people to be happy at work, whether with your company or outside of it, is always a winning people strategy.

Sometimes you do all these things, and the individual still leaves. While you always want to minimize the kind of turnover that has people running away from your company, sometimes you get the kind of turnover where a person is running towards something else. A new kind of dream. A new kind of life. I, for one, am so grateful we largely don’t spend 40 years at one company anymore.

My high school biology teacher once told me, “one of the best things in life is the variety of your experiences.” The variety is what makes us interesting. It shapes who we are. It offers us new perspectives and wisdom. That’s true for the individual, but also true for your company, as new people come through your doors bringing new talents and lessons.

That’s the right kind of turnover.