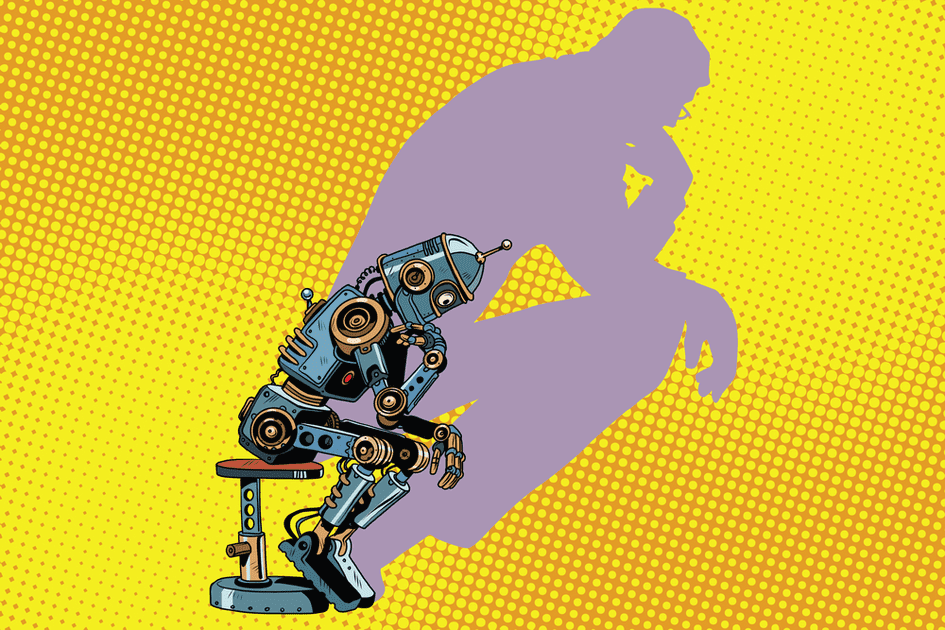 If Amy Webb is right, we should either be excited, alarmed, or terrified by the advance of artificial intelligence this century.

That uncertainty is built into the title of her latest book, The Big Nine: How the Tech Titans & Their Thinking Machines Could Warp Humanity. We could wind up warped, but Webb can’t predict the future—only model it.

The eponymous “Big Nine” with the power to deform humanity is divided into two groups: Google, Microsoft, Amazon, Facebook, IBM, and Apple in the U.S.—and Baidu, Alibaba, and Tencent in China. (Webb cheekily dubs them the G-MAFIA and the BAT). Much of the first section of the book is devoted to the current state of AI research within the companies and explains where they may be headed in both the distant, and not-so-distant, future.

Yet the book begins, as it must, with a history lesson. Webb mercifully moves quickly along well-trod paths like Turing’s Imitation Game and the ELIZA program, focusing on pivotal moments in AI’s history, such as the legendary Dartmouth workshop in 1955 that sparked a frenzy of both practical and theoretical work on artificial intelligence.

Readers also get a look at the insular world of the Big Nine, one in which a handful of universities supply the vast majority of the talented individuals who join the ranks of these illustrious companies. In one of the more fascinating portions of the book, Webb examines the costs of this homogeneity and what it means for humanity that a small, mostly male, group of alumni from the same universities are engineering the future of artificial intelligence.

Of course, it isn’t just investors and technophiles who have much to gain from this tight-knit system’s advances in AI. The U.S. and Chinese governments also have a vested interest in artificial intelligence, and Webb uses The Big Nine to sound the alarm about the divergent paths the countries are taking.

In the U.S., a lack of urgency and vision on the part of the government and the quarterly demands of rapacious shareholders are the biggest threats to safe, user-friendly AI. But in China, the situation is vastly different. The government is deeply invested in becoming the world leader in AI, and the state is doing everything it can to promote the success of the BAT and keep competitors out of China. The authoritarian regime in China isn’t pouring massive amounts of money into the development of AI just to keep an eye on its own populace, either—the social credit score and surveillance state are meant to be exported. The Chinese are cultivating relationships with governments that are desperate for infrastructure and already have a decidedly authoritarian bent.

The second half of the book is what you probably came for—an answer to the question, “So, what happens next?”

All of them seem slightly fantastic in some ways, darkly realistic in others. For instance, although the end of the Catastrophic scenario may garner some eye rolls, it also includes the emergence of a digital caste system (are you an Apple family or an Amazon family?) that feels depressingly possible.

It’s not much of a spoiler to tell you the Pragmatic and Catastrophic scenarios both end with global Chinese dominance (though there’s certainly a reason one of them is named Catastrophic).

Unfortunately, the reader won’t find much relief in the possibilities awaiting humanity in the Optimistic scenario. Webb is able to clearly illustrate how advances in AI will benefit healthcare, construction, and a number of other professions. But when it comes to our personal lives, the “improvements” feel forced.

Mixed reality arcades and movie theaters will apparently get us off the couch and socializing in person, though it’s not particularly clear how they’ll accomplish that feat. Our children will interact with strange, “empathetic” robotic pets when caring for real animals becomes too much of a hassle. And, for some reason, we will be excited to hear new AI-generated Rolling Stones songs that are “just as loud, hard and fulfilling” as Paint It Black.

The reason this all feels just a little off becomes clear later when Webb describes how we’ll consider our current lives.

“We think of 2019 as a much simpler time, one full of tedious and monotonous tasks.”

This is the constant refrain of progress and improvement we hear from technologists—the more we can offload to an algorithm, the better. Yet the rush to simplify our lives ignores the fact that an easier existence is not necessarily a better one. And we may not be doing ourselves any favors by removing all the difficulty, tedium, and struggle from our lives. As Nicholas Carr writes in The Glass Cage:

“By taking over difficult or time-consuming tasks, or simply rendering those tasks less onerous, the software makes it even less likely that we’ll engage in efforts that test our skills and give us a sense of accomplishment and satisfaction. All too often, automation frees us from that which makes us feel free.”

At one point in the Optimistic scenario, Webb imagines that in the future gardens of wealthy homeowners, “Sensors continually measure moisture levels and compare that data to microclimate forecasts. Simple irrigation systems automatically water plants, but only as needed. AIs predict optimal levels of hydration, which means the end of timers—and dead begonias.”

This AI system seems destined to force a type of decision upon us in the coming decades: Is a garden simply an adornment to behold and admire? Or, possibly, is it something to cultivate—a labor of love and a source of deep satisfaction?

After finishing The Big Nine, it’s easy to imagine the emergence of a world in which the begonias flourish while the humans wither in the starved soil of an AI-dominated existence. In fact, in 30 years we may need a revised version of Voltaire’s Candide, one that is more in line with the prevailing style.

“Tis well said,” replied Candide, “but we must watch the algorithm cultivate our gardens.”

Reader, writer, content provider. You can find me in St. Louie.