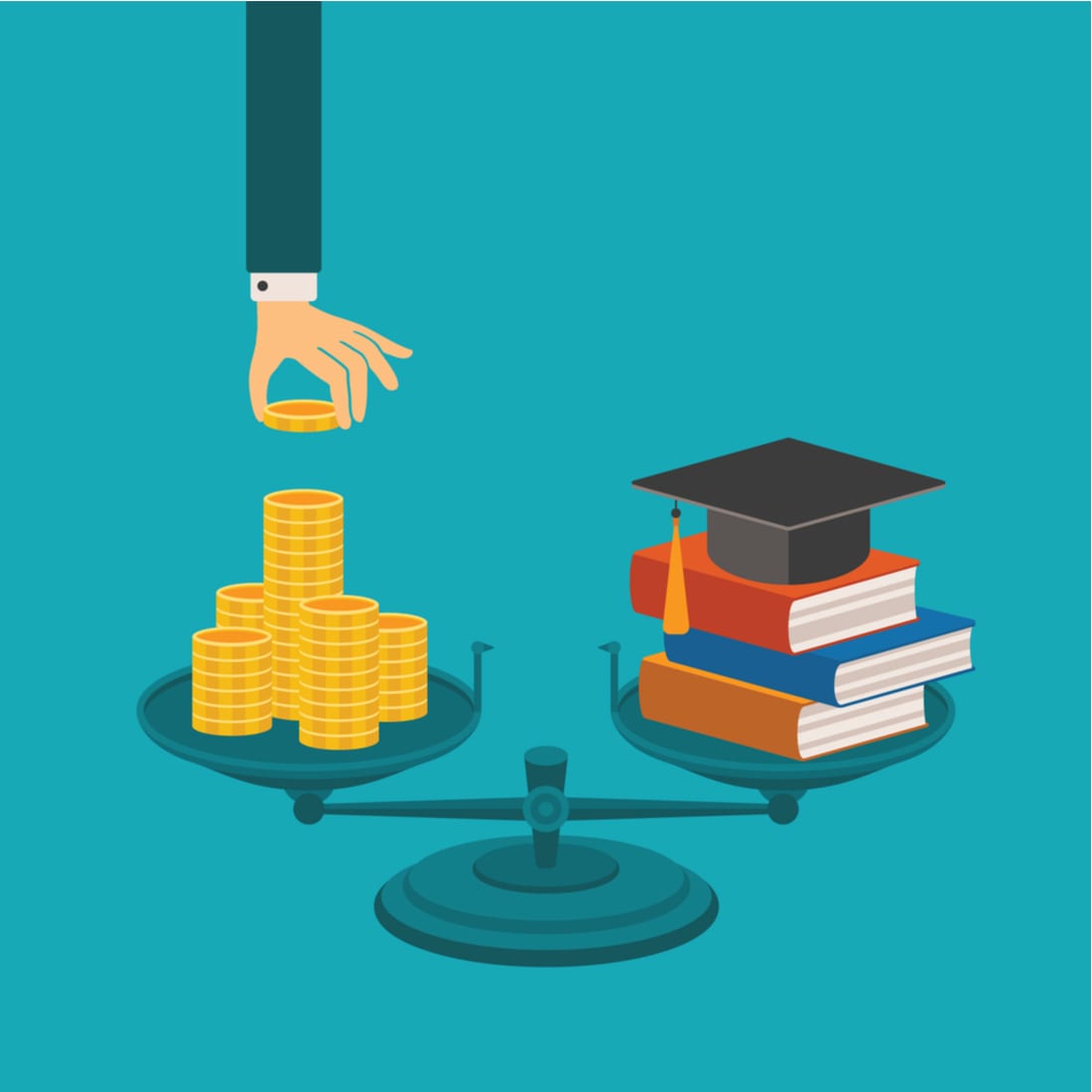 It’s no secret that obtaining a college degree today is dangerously, illogically expensive.

But a quick look at just how expensive it’s become still succeeds in producing a shock.

According to U.S. News, for example, tuition to attend New York’s Columbia University this year cost students $59,430––not counting room and board, food, or books. The University of Virginia? $45,066.

Granted, these are two of the most expensive private and public universities in the U.S., respectively. But even the average per-year price to attend a public four-year institution––$23,890 out of state––is staggering. Over four years, it costs students $104,480 to obtain a degree. According to the U.S. Bureau of Labor Statistics, that’s a 174.48% increase over the average tuition price 20 years ago.

That number is, for obvious reasons, unsettling. As it continues to grow, it pushes aperilous student loan debt crisis closer to the brink, and it further burdens younger generations who already face worse economic prospects than their parents.

It would appear obvious that something needs to change. Yet many have accepted these exorbitant costs as something of a new status quo.

Which is a mistake.

Instead, we should be asking why obtaining a college degree in 2019 proves so condemningly expensive, along with how much the experience should actually cost.

These are questions I thought about and studied meticulously when I was launchingNexford University. My team and I worked to identify metrics and methodologies to determine the correct way to price going to college. In the process, we learned much about where tuition dollars go currently, along with what needs to be done to make providing higher education more efficient.

Here’s the truth: students today pay for experience and administration––not for education.

If you study the university landscape across the world today, something unfortunate becomes clear. Namely, factors relatively unrelated to learning have an outsized impact on the price of obtaining higher education.

Of the $24,000 a student might pay for a year of tuition, for example, a majority goes toward either the construction of new buildings and state-of-the art research facilities––universities spent more than $11.5 billion on new buildings in 2015 alone––or toward pension preservation and healthcare costs, commitments for whichthe Pew Center on the States estimates public universities currently owe as much as $1.4 trillion.

According to the National Center for Education Statistics, meanwhile, actual instruction accounts for a measly 27% of a typical university budget.

This evidences a severe disconnect between what students think they’re paying for when they enroll at school, and where their money actually goes. In reality, what students are paying for when they sign tuition checks are the nice buildings and dormitories in which they spend their time, the tenured professors they see two hours a week, and the refurbished auditoriums in which they network.

Maybe for some, but likely not for all.

The answer to this question of what college tuition should cost is varied.

There isn’t, in other words, one preferable or easily-quantifiable set cost.

Nor should there be.

Not every university experience is created equal. There are, no doubt, students who want to pay for classes in ivy-clad brick buildings, glistening facilities, and renowned professors.

But what if students want a stripped-down university experience? One which skips the pomp and architectural innovation in favor of the more straightforward chance to master the job skills they’ll need in their future careers?

Which is to say, they deserve more options. And it’s imperative that universities provide those to them. By doing so, we’d be giving students the chance to themselves help determine the right price and actual value of a college education––you know, the way consumers do in nearly all other aspects of our economy.

Consider the way cell-phone providers sell varied-tiers of usage plans, for example. Customers go into Verizon, and they know that if they purchase Plan A for $200 a month, they’ll get X amount of international minutes or Y GBs of data. If they don’t want international minutes, or don’t need such a substantial amount of data, they can opt for a cheaper plan.

That’s the sort of model higher education needs to replicate. It’s what will enable us as an industry––and, more broadly, as a global community––to more accurately determine in the years to come what a college education is actually worth. It’s a matter of empowering buyers––students––to establish through economic decisions the fair market value.

We have to start thinking about higher education from this kind of consumer perspective.

The bottom line is students cannot be forced to continue paying for things they don’t want or need––especially if paying for those things entails saddling themselves with debt for the rest of their lives. Universities assuming they can fix the market in this fashion is a big part of what’s landed us in this hole in the first place.

What the sellers in this situation––universities––need to offer instead is increased transparency and a wider array of buying options.

That’s not really a radical idea, either. It’s in universities’ best interest to provide as much. According to Moody’s, as of 2017, U.S. colleges and universities were in debt to the tune of $240 billion. Part of the reason? Fewer students are enrolling, but operational costs continue to increase. Universities could reverse that trend by offering students education plans that more aptly fit their needs.

While my team and I were building Nexford, for example, we priced our ultra-efficient MBA program––stripped of pomp and circumstance, focusing instead solely on the education––at as low as $3,000.

Is $3,000 the answer to this question of what a year of college tuition should cost? No, not exactly. There is an argument to be made that the cost of obtaining certain degrees and experiences from top, brick-and-mortar universities is in fact commensurate with the value derived from the enhanced career prospects those degrees promise.

What we’ve seen, however, is providing students with one loaded, $50,000-a-year option is neither efficient nor effective.

Universities should seek instead to provide students an array of varying experiences and levels of access––imagine a world where students could opt out of utilizing or accessing expensive new campus facilities in exchange for a lower yearly tuition––with price points determined by consumers who themselves are operating in a responsive and dynamic marketplace.

It’s incumbent upon education providers, in other words, to lead the change.