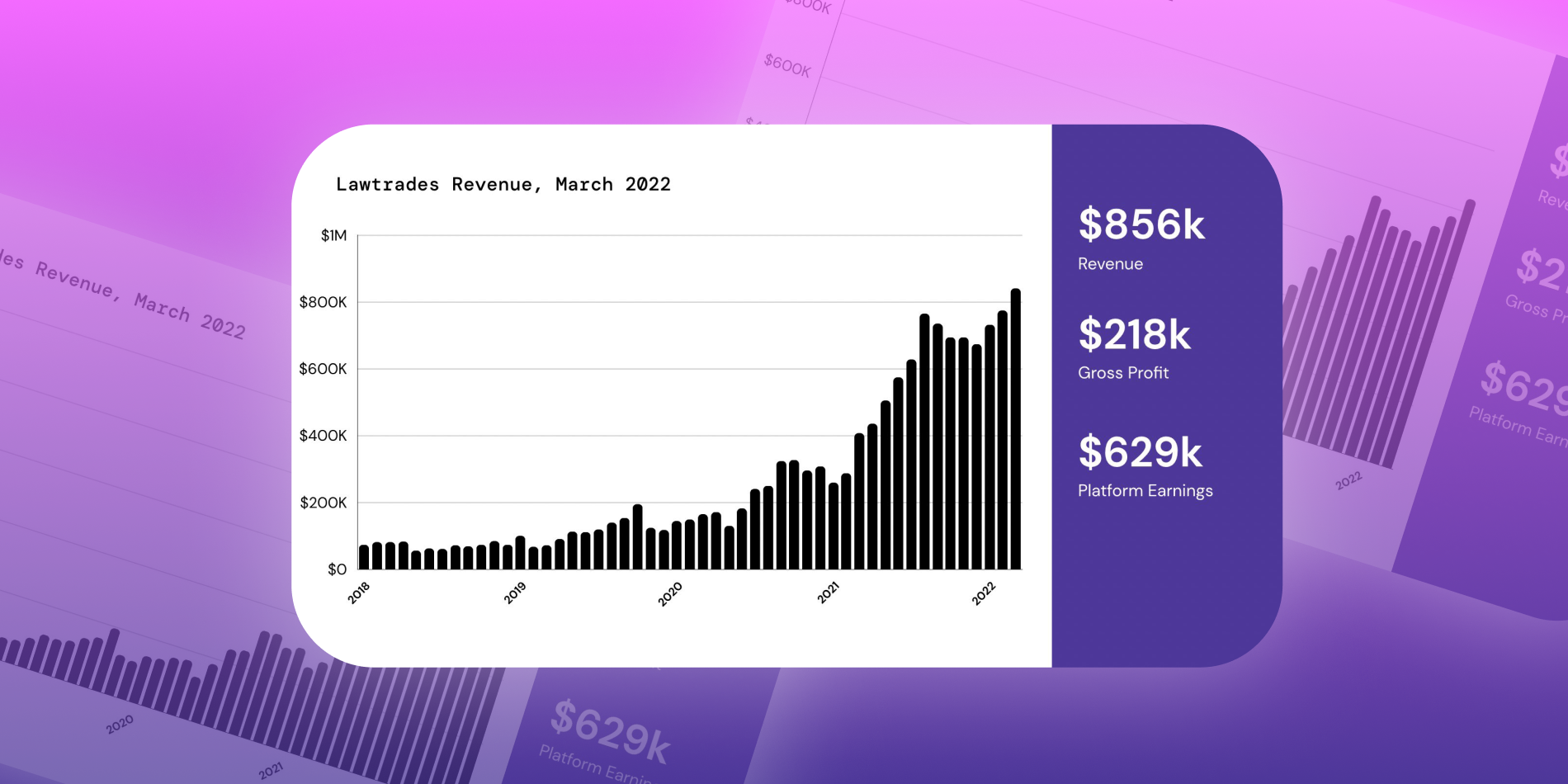 Ever since Lawtrades took off, I’ve been sharing our deepest secrets.

That is, I’ve been tweeting the following four metrics on a monthly (sometimes quarterly) basis:

As recently as a couple of years ago, tweeting like this would have seemed insane. The norm has long been to build quietly — fundraise, recruit, and establish a company in private.

But lately, a trend toward radical transparency has emerged, fueled by founders like Elon Musk. The Tesla CEO has a long track record of controversial tweets — tweets that other founders would never have dreamed of publishing. In the short term, Musk’s unorthodox approach hasn’t always worked in his favor. But over the long term, it has built him and his companies a dedicated global fanbase.

Why? Because in the disinformation age, people are hungrier than ever for trust. Tweeting information that most companies hide builds trust, separating founders like Musk from the pack.

So, I decided to do the same with Lawtrades. Two years ago, I began tweeting revenue, profit, platform earnings, and number of customers on a regular basis. Numerous new investors later, I couldn’t be happier that I did.

1. It shows authenticity and vulnerability, two key ingredients of trust

Sharing financial metrics shows authenticity and vulnerability. It shows that you’re not afraid to give the outside world a peek behind the curtain — that you have faith in yourself and your people, and nothing to hide.

2. It keeps you accountable — especially early on

Larger, more established companies have investors, boards of directors, and/or shareholders to keep them accountable. Smaller companies have none of those resources. Committing to a regular schedule of tweets makes you accountable to your following — people who admire your transparency and are rooting for you.

Plus, instead of anguishing over a long investor letter, tweeting forces you to distill your story down to 280 characters. It removes the writer’s block and forces you to focus on only the most important information.

3. It gives David (you) an advantage over Goliath (them)

In your early days, you’re David, and your competitors are Goliath. Goliath could mean other companies in your space. Or, if you’re trying to establish a new space, Goliath could mean the normalcy bias that prevents people from developing new habits.

This was certainly the case for Lawtrades. We were up against 100-year-old firms with billions in yearly revenue. They had names, reputations, and proof of concept. But what they didn’t have was transparency.

Most private companies stay private so that they don’t have to give behind-the-scenes tours. But for me, the best private companies operate like public companies, holding themselves accountable by publicly sharing high-level performance metrics. Embracing transparency builds a level of trust that your established competitors don’t have.

How our financial tweets have attracted numerous investors

One of our newest investors, Sahil Lavingia (CEO of Gumroad), initially rejected us.

I got more transparent about our numbers and our overall performance. I tweeted screenshots of customers we signed up. A couple weeks after Sahil’s auto-rejection, he emailed me, saying, “I think I might have made a mistake. Can we chat?”

After our discussion, he came back into the round and invested $100k.

Lawtrades has a bunch more stories like that, where investors reached out to us as a direct result of tweets. Tweeting is a much more effective strategy than cold emailing, where you’re likely to languish in inbox abyss.

People understandably fear this kind of transparency. It’s a species of impostor syndrome: You look around and see companies raising millions, generating billions in revenue, and you think your story is puny by comparison.

But when it comes to your story, size doesn’t matter. There are a lot of people out there who would be really impressed to hear that you’re generating $100,000 a year. More than largeness, people admire realness. They want to support people and companies who deserve it. By crafting your story through regular, brief, vulnerable updates, you plant the seeds of trust.