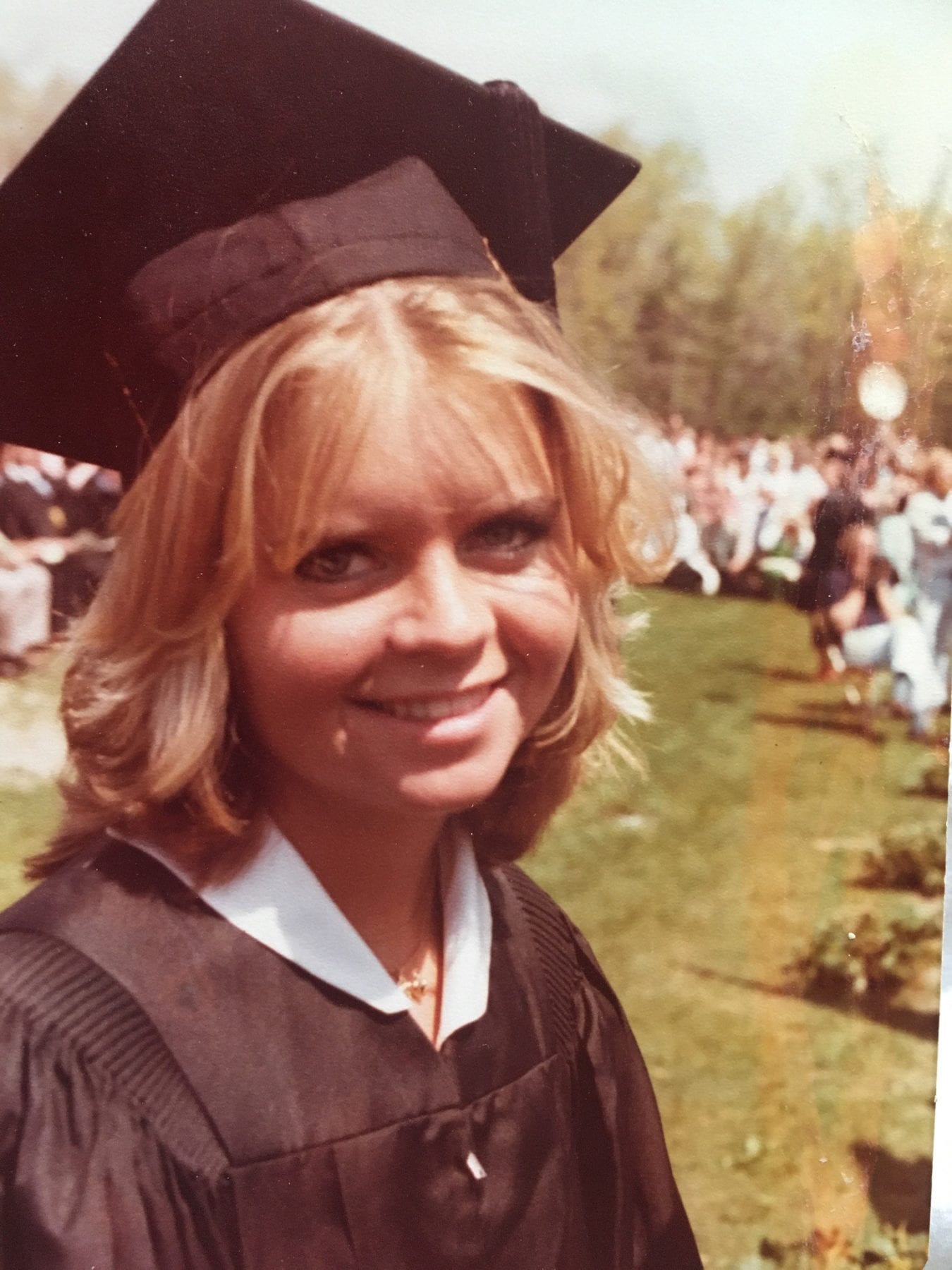 Every Mother’s Day, I write my mom a letter. When I was little, I’d deliver it to her in bed, alongside coffee and a plate of poorly made eggs. In high school, I’d give it to her reluctantly, and in college it was accompanied by flowers or chocolate. However presented, the letter itself was always similar: it voiced appreciation for my mom as a mom — as if that function was the sole defining feature of her life.

Turns out, it’s not.

So here’s my mom on a Thursday night in 1976, standing on the side of the Wayland High School football field, chin turned up at a rising swell of expectant faces and clouded breath. It is cold, the air bodied with mist too weak to register as snow, but strong enough to cumulate on the shoulders of the letterman jackets dotting the crowd, a kind of crystalline ash that settles, too, on the back of my mom’s neck––but she doesn’t seem to notice. She’s standing alongside six other members of the high school twirling team. The girls are nervous — the bleachers are full, damn near the whole school is here — but my mom is the epitome of cool. Her eyes could cut ice. She bounces on her toes, all muscle and kinetic potential. In her hand she holds a baton which has been lit on fire at both ends. She holds it as casually as others might grip a tennis racket. The New England night yawns out behind her.

A few seconds pass, the crowd waiting, the girls breathing. Then the bandleader at left motions with a gloved hand. He counts off — 1 2 3 4! — and the small circus of drummers and trumpeters standing behind him start pounding at their instruments, descending like tumbling rocks into the school’s fight song. My mom’s cue. She bends at the knee and flings her baton high into the air. The flames dance against the black. When it comes down again, she catches the baton behind her back, on beat, and spins and twirls it in front of her chest — bits of flame still lingering in the sky above. The crowd roars.

Now here’s my mom at 19, sitting behind the wheel of a light blue ’79 Chevette, cruising through the floating golden light of the high plains at mid-day. Boxes and suitcases and trash bags full of clothes are bundled like stolen cargo in her backseat. She’s headed for Santa Barbara, where someone she knows vaguely from school says they have a place for her to stay. She’s never been to California, but she’s going anyway. Her arms — well-toned from years of varsity gymnastics, in addition to the baton twirling — look like sanded tree limbs gripping the wheel. She drives with the windows down. Olivia Newton-John skittles out the stereo.

Three months later, my mom’s sitting on a blanket on the beach, alone and broke on the edge of a continent. She lives in a musty apartment and subsists on a jerry-rigged diet of noodles and tuna. She finds solace in her new-found freedom, plus the symphonic reliability of the Pacific crashing in, out, in, out, but sometimes she wonders if she’s made a mistake.

My mom is brave, though, remarkably so, and she’s coiled with resolve, and she finds work. Incidentally, it’s teaching jazz aerobics inside an all-women’s maximum-security prison. She sells out her class slots routinely, often staying late to chat with the inmates about what landed them in the pen. Ah, don’t sweat it, she says, I’da killed him, too.

After a time we move to the suburbs — a town called Walnut Creek––and there my mom proceeds to become quite possibly the most popular person in the history of suburbia. She coordinates not one but two alternating Bunko leagues. She team-moms a rotation of youth baseball teams, volunteers for political campaigns, and serves as the de-facto president of two separate PTAs.

Yes, here it would appear that our hero has found contentment, settled snugly into the quaint sensibility of her movie’s third act. But, again, she is tested. In 1998, my grandma is diagnosed with colon cancer. The diagnosis is sad and scary, but it prompts something pivotal inside my mom. Seemingly at once, all the disparate threads of devotion and curiosity that she’d cultivated over the course of her life coalesce into singular meaning. Into purpose. With the same sort of grit and tenacity that compelled her to twirl flaming bars of metal high into the air back in Wayland, my mom immerses herself in research about colon cancer. And she discovers that there’s pretty much jack when it comes to resources or guidance for patients like my grandma. So she helps found a nonprofit called The Colon Cancer Alliance. She creates and goes on to lead perhaps the most useful arm of the Alliance, something called The Buddy Program, through which patients are connected with survivors and/or family members who’ve been through the shit and can help. She works out of our living room, at a desk shoved into a nook in the wall. On that wall, above the computer, she pins a magnified and anatomically-correct rendering of the human colon.

From here on out my mom spends, like, eighty percent of her time on the phone, talking with buddies and her bosses but mostly with patients, crying with them, encouraging them, feeling their pain while pushing them forward. Because her office is essentially in the living room, I grow up listening to many of these conversations. At thirteen, I find them kind of annoying, but what strikes me when I revisit them now is the almost super-human amount of empathy my mom always managed to save for the people she spoke with.

I knew, at thirteen, that my mother was unique — that she was in her younger life something of a badass; that she’d been an athlete in school; that she’d driven across the country to start a new life, alone, and that she used to work in a prison — but I never internalized the full truth, which is in addition to badass, my mom is sort of a hero. The kind people make movies about.

Every person has a story. And each story is composed of subelements: surprises, adventures, fears no viewer could have foretold. As children, just sort of in general, I think, we have trouble conceiving of this fact — that there are other stories happening in conjunction with our own — but as we stumble and claw into adulthood, we garner more perspective, and come to recognize the histories inside each pair of passing eyes, the novels inside each warmly glowing apartment window.

But why, then, even into adulthood, do so many of us hold onto our limited and one-dimensional conception of our parents?

Maybe it’s just me, but each time I step back and conjure a mental image of my mom, even now, I don’t picture my mom the badass, but my mom, the mom––the maker of excellent mac and cheese; the giver of incredible back rubs; the most constant and reliable presence in my life; a version of the picture below:

I was reminded of this tendency when I started writing my annual Mother’s Day card. I led once again with lines about how much I loved my mom, and about how much I appreciated her, but I stopped a few sentences in. This year, I wanted to do something different. I wanted to appreciate and admire my mom as the twirler of flaming batons; as the girl who had enough guts to drive across the country alone at 19; as the teacher of prison aerobics; as the complex adventurer; as the co-founder of what is now one of the country’s largest nonprofits — a nonprofit for whom she still works, by the way, and in the same role, too, having relented the prestige and pomp of more executive positions in favor of a function in which she knew she’d have the most impact. To this day, she wakes up every morning, marches into our living room, and talks with cancer patients on the phone, lending them her empathy and expertise. It’s amazing, and I wanted her to know that I saw all that — that I knew she’s always been a badass. I wanter her to know that she’s an inspiration to me, a dynamic, courageous, capable, remarkable person whom I admire and study every day.

But, in truth, I wanted something more, too. I wanted the whole world to know how cool my mom is. And what better occasion to tell her story than on Mother’s Day? A day on which sons and daughters all over the world gift their moms with perfunctory trinkets and overpriced Hallmark cards. There’s nothing wrong with that, of course. We should tell our moms how much we love them every day. But most moms are, as it turns out, much more than just moms.