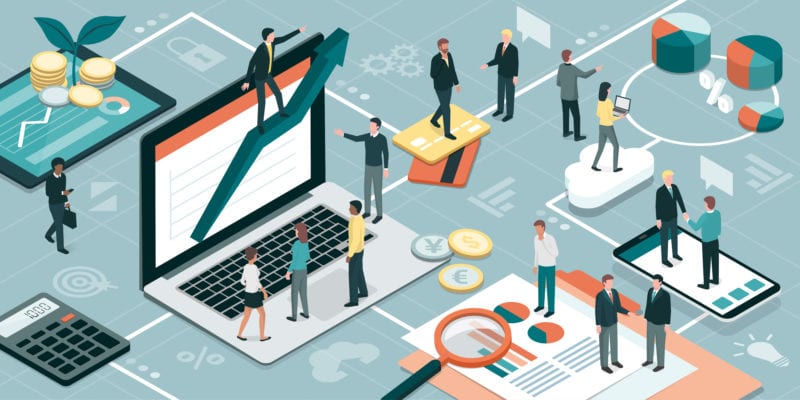 I’m a 28 year old founder, and I spend more time talking to founders of successful companies than I do peers my own age.

The reason is first (and current) company is a Thought Leadership agency for founders, executives, investors, and industry experts called Digital Press. Not a single day goes by where I don’t interface with at least two, usually four or five, founders of heavily funded startups or CEOs of companies worth tens or hundreds of millions of dollars. To be perfectly honest, it’s the greatest “first venture” I could have possibly ever started—I’m getting paid to learn from some of the world’s most intelligent and successful business leaders.

The only problem is: I didn’t really create it on purpose.

When I first started Digital Press with my co-founder, Drew Reggie, our main driver to build a successful company was nothing more than to make sure we could both continue paying our rent. It was born out of a desperation to find our footing as mid 20-somethings that had just “taken the leap” than it was some brilliantly-precise-sniper-rifle-shot of an idea. It wasn’t until we hopped on our phone with our very first client that we realized the opportunity we’d stumbled upon: “I’ll have to call you back. I’m in a bit of a tiff with Warren and need to take this,” he said—before hopping off the line for 37 minutes.

The “Warren” he was referring to was Warren Buffet.

Meanwhile, Drew and I were sitting on two cardboard boxes in my studio apartment in Chicago, my cell on speakerphone. I was moving to Los Angeles in the morning.

Fast-forward almost two years, and we’ve worked with CEOs of billion-dollar companies, founders of some of the most well-known tech startups in the world, Grammy-winning musicians, NYT best-selling authors, international public speakers, and more. We get to ask them any and every question we can think of, and in exchange, we help them turn their stories and insights into high-performing content online—all while running a profitable business.

And after working with 100+ of these “founder types,” do you want to know the overwhelming answer to the question, “What’s the hardest part about starting a company?”

I’ll never forget working as a copywriter downtown Chicago at a small advertising agency right out of college. I stayed at that agency for so long because the creative director (and one of the owners of the company) had offered me opportunities to work directly with him—and I found those learning experience invaluable. And something he said to me time and time again, whenever I would naively ask why he wasn’t doing something faster within the business, was: “Because I can’t do it alone. I need the right people.”

I didn’t truly understand what he meant until I started a company of my own.

Time and time again, I’ve heard this same answer from founders of companies big and small, heavily funded and bootstrapped. “People,” they say, always with tough skin and a tired sigh—as if they’ve learned this lesson too many times the hard way. “Having the wrong people on the team prohibits growth. Hiring the wrong person can cost your company a tremendous amount of money. People, not ideas, are the biggest barrier to bringing your idea to fruition.”

But I’d take this answer one step further.

The reason “people” can make or break a company isn’t just because people (at least, until The Great AI Takeover) are the true building blocks of an organization. It’s because, as a founder, the amount of decisions you have to make in a day is almost incomprehensible:

I’d say, for almost every founder I know, the above is an accurate reflection of what 30 minutes in their world looks like.

And, of course, all of these questions are fair and entirely okay. It would be naive for the leader of a company to think that “giving people direction” wasn’t Priority #1.

The challenge, however, is that all of these decisions come with an asterisk* next to them: people are emotional puzzle pieces.

Imagine you’re playing a game of Jenga, and you have to find a way to assemble all the pieces in the box in a certain order to achieve the ultimate goal of building a Jenga tower. How you “decide” which pieces should go where is largely based upon your own individual and solitary mindset and perspective. If you, the builder, want to put a certain piece first, then second, then third (or if you have to make a “tough call” between two very similar pieces), very little is stopping you. It’s your Jenga tower. The pieces are made of wood. And it’s just you and your puzzle.

In the startup and business world, however, you’re still playing a game of Jenga, just with an asterisk next to the word (Jenga*). And that asterisk symbolizes the fact that your Jenga pieces are human beings, which means you can’t just consider your own decisions, but you have to consider the emotional impact of each and every one of your decisions:

All of the above (and hundreds more) are no longer just “decisions.”

They’re highly emotional situations disguised as “business decisions.” And, as if the logical aspects of building a startup weren’t complicated enough, sprinkle on the never-ending wonder of how your decisions will be perceived or understood and that’s the reason every single founder I’ve ever talked to has repeated the same answer.

Because in order to lead, and in order to truly bring your idea to fruition, you have to learn The Great Humility that comes with being an effective founder. Which is the deep understanding that your idea, incredible as it may be, cannot and will not come to fruition without the help of others.

And if you want others to assist you in your creative quest, you too have to be willing to assist them: in their professional life, yes, but also in their life experience as fellow human beings.

This means hearing them.

Empowering them, and showing them you care.

And practicing that, on a day-to-day basis, while simultaneously solving short-term problems and imagining long-term solutions, is without question, the hardest part about starting your own company.