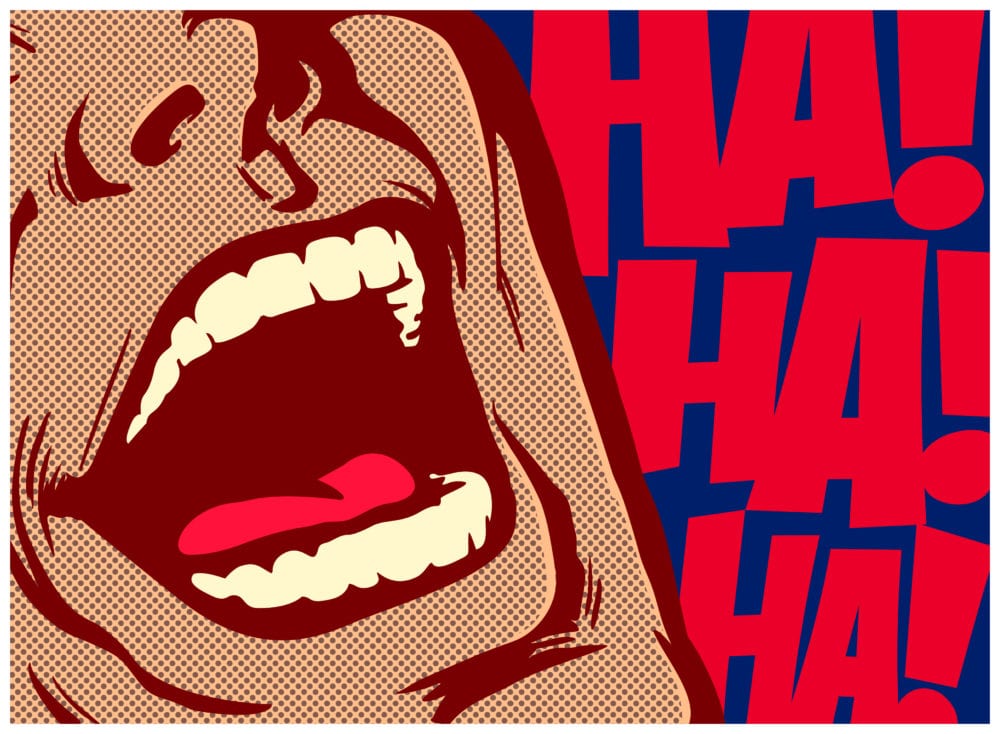 Unvirtuous, pilfering social media empires are falling—and it seems like copyright law and order are finally being established in the Twitterverse and on Instagram, Facebook, and elsewhere.

When I saw the angry, comedian-led mob assembling on my Twitter timeline, berating and incriminating Barstool Sports and FuckJerry (AKA Jerry Media) for using content without permission, credit, or compensation, I was overjoyed.

Finally, a collective movement against those overrated, content-thieving social media accounts-turned-empires, I thought.

When I looked a little closer, though, I realized there were actually two distinct angry mobs, each a result of entirely separate grievances: #FuckFuckJerry, a campaign led by comedy writer Megh Wright, and another crusade against Barstool Sports spearheaded primarily by comedy writer and podcaster Miel Bredouw and popular internet culture writer Drew Magary.

Then I zoomed back out and read up on both situations. I wanted to know if this was a single, joint movement—a social media copyright revolution, perhaps—or if it was purely coincidence that both Barstool and Jerry Media were finally being held fully accountable at the same time for years of profiting through stolen creative content.

It looks like it’s a little bit of both.

There’s a lot to it, but I’ll do my best to break it down for you:

On March 7, Barstool Sports deleted over 60,000 tweets—over 70% of its main account’s total tweets—and over 1,000 Instagram posts, presumably in an attempt to avoid more copyright claims.

People hate Barstool, by the way, for a host of other reasons aside from content theft, including alleged racism, misogyny, and cyberbullying.

It has been publicly supported by big comedy names like John Mulaney, Amy Schumer, and through dedicated song by Tim Heidecker. Listen to it, please.

Jerry Media and Netflix are also being criticized for FuckJerry’s Fyre Fest documentary, which allegedly enabled Jerry Media to unjustly clear its name in the well-documented music fest catastrophe. Wright sparked the outrage by pointing out the conflict-of-interest here, too.

Jerry Media has attempted to put out the fyre—err, fire—by blocking everyone who criticized them on Instagram.

Comedy Central ceased advertising with Jerry Media amidst the controversy started by this Wright article.

This isn’t the first time either media organization has been accused of content theft.

There are countless examples, but here are a few noteworthy ones:

This is a huge step forward. We’ll see how they do.

What’s the goal of these movements?

Wright’s intention is to start an entire movement against content theft, especially stolen jokes, but Bredouw and Magary’s objectives are less broad-scoped.

Wright, while focused on #FuckFuckJerry, has also consistently attacked Barstool with content theft accusations. Bredouw and Magary have only criticized Barstool, not Jerry Media. Bredouw is pissed about having her joke stolen and being harassed by a horde of Stoolies, and Magary simply despises Barstool at its core, especially as a frequent contributor of archnemesis Deadspin.

Wright believes an unfollowing movement will be more detrimental to FuckJerry than Barstool “because in the case of FuckJerry, a lot of those followers just weren’t aware of what they were supporting.” She goes on to imply Barstool’s general fanbase is incorrigible and too shameless to care about ethics and stuff. That might be true, in part, but I disagree with the idea overall. Aside from hardcore Stoolies, there are plenty of casual Barstool social media followers to enlighten and persuade to unfollow.

Woof. So there’s all that.

Either way, this reckoning feels like a long time coming, doesn’t it?

While I’ve never personally created content worthy of theft and reposting, apparently, I’ve always been bothered by the fact that you can build massive social media followings by ripping off others’ creative work, especially as a creative of sorts myself. And once you have a sizeable following, you can monetize your social media accounts in a number of ways, most commonly for these offenders through sponsored content.

And in the case of social media accounts-turned-media-giants like Barstool and Jerry Media, entire empires have been built in large part through stolen creative work—jokes, tweets, Instagram posts, viral videos and photos, etc. (Sure—I’m a tad salty Elliot Tebele, founder of Jerry Media, makes a good chunk of my salary with a single sponsored Instagram post.)

So the question remains: How do these massive media empires get away with monetizing stolen content, especially in these lawsuit-happy times?

On social media, it’s tough to tell copyright from copywrong.

As detailed in this Intelligencer article, the laws surrounding social media content copyright are gray and blurry-lined. Of course, the internet is an inherently lawless, Wild-West-like pixelscape. But by the looks of it, these digital cowboys have become too rich and brazen for their own good.

Big social media platforms have enabled the rise of Barstool, Jerry Media, and the like through inaction.

Surely because, all things considered, these guys using their platforms is good for business. At least until enough users begin to complain about their unethical ways.

As noted in this other Intelligencer article, FuckJerry routinely violates Instagram’s first Community Guideline rule. But IG doesn’t actually enforce that rule, it seems. At least not against meme giants like FJ.

Twitter has finally begun to take some action against copyright offenders, including against Barstool, when creators like Bredouw submit copyright claims. Her harassment by Stoolies was an attempt at convincing her to resolve the claim and avoid a potential Barstool Sports Twitter account suspension. A Barstool lawyer’s offer of a $50 gift card in exchange for a resolved claim was called “moronic” by Barstool founder Dave Portnoy and refused by Bredouw. Apparently, she didn’t want a free “Call Her Daddy” hoodie.

So whether or not this simultaneous widespread outrage truly is a collective movement at this point, it might as well be.

Is what we’re experiencing right now going to make a dent in the armor of these social media conglomerates?

The way things are going right now––and judging by the passion of the people leading the movement––the answer might just be yes.