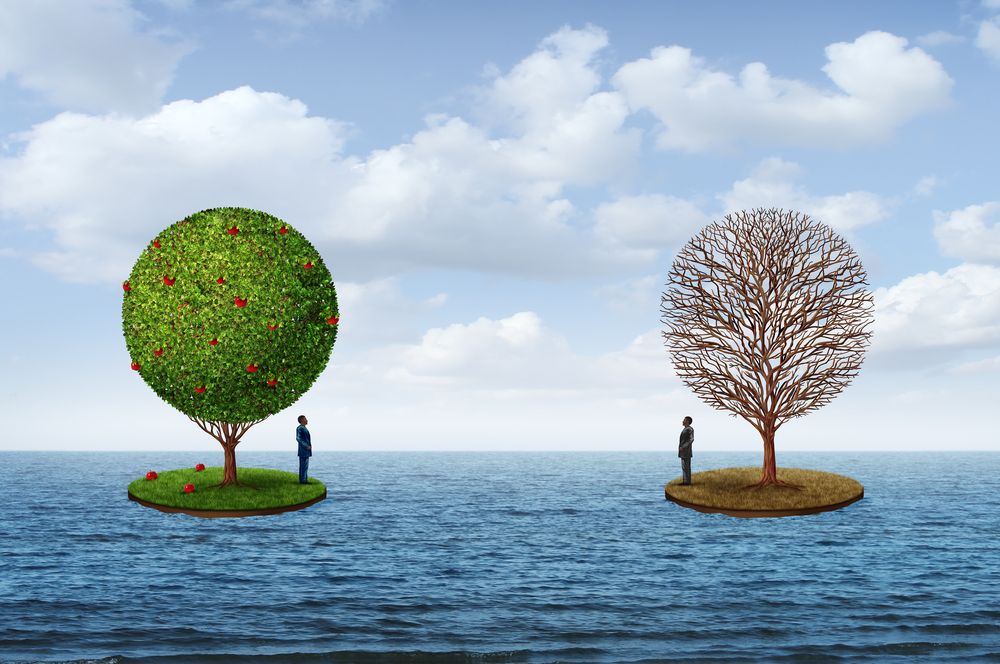 Most of the world doesn’t think of “economy” as a man-made construct.

We think of it the same way we think about nature: it was here “before” us, and it will be here “after” us. It’s too big to fathom, too complex to understand—and as a result, whether we are conscious of it or not, we worship it with divine belief.

Ironically, economy is a reflection of nature.

In hunter-gatherer societies, “economy” was fair and balanced. There was no hierarchy, no competition. It was a cooperative environment—and as one tree fell, the next rose in its place, and so on and so forth.

However, looking at history, hunter-gatherer societies only developed where there was an abundance of resources, usually near a forest or in a place that was temperate. In the desert is where we developed a hierarchy—a more “survival of the fittest” environment. In this sort of economy, scarcity ruled, to the point where (slowly over time) this model became the “normal” approach to life—even in places with abundance. Strong against weak. Winner against loser. Those who “have” and those who “have not.”

Fast-forward, and what we’ve ended up with today is a very limited amount of people who control 95% of the planet’s resources, while the rest of the world is starving.

In 2019, we are currently producing food for 10 billion people—and yet we are a world of seven and a half billion, two billion of which are starving.

And I’ll explain how—with a little story called The Island Of 10 Palm Trees.

Let’s say you have an island with ten people and ten palm trees.

The economy we’ve created for ourselves says this very basic principle: if each of the people on the island has the power to sustain themselves (food, water, etc.), by definition, there is no economy. If I try to sell the fruits of this palm to someone else, nobody will buy them because the others have the same fruits and are healthy and self-sustainable.

But imagine a hurricane or tornado hits this island and wipes out four of these 10 trees.

Now, all of a sudden, an economy is created.

The four people who no longer have palm trees to sustain themselves will suddenly be willing to buy the fruits from the other six who are regularly producing fruit.

Now, the economical theory of Smith and Kerns would say: in this situation, if one of the six people who still have a tree start to price on their fruit, then someone else will lower the price in order to compete for the customer—and you will always have a market that balances itself out. This is supply in demand in its most basic form.

Unfortunately, this theory is demonstrated to be untrue because the person with the palm will start to pursue more power. He or she will understand the rules and dynamics of supply and demand, and find ways for the others with palm trees not to compete. He or she may start to buy the other palms in order to have a situation of dominance—or, imagine another tornado comes and destroys the other five palms. That means the individual with the last remaining palm tree not only controls the price, but effectively controls the food supply. He or she becomes the ruler of the island, and is capable of deciding who lives, who dies, and everything else that happens on the island.

This is what happens when you build a model around scarcity.

If you design things based on abundance, you not only create conditions for abundance to prosper, but you can also create the premises for an entirely new planet based on different premises—no different than the island based on scarcity. Except you don’t have to “consume.” You don’t have to “produce.” You don’t even have to have the problem of jobs, for example. According to an Oxford study, 47% of jobs all over the world will vanish in the next 25 years, and those jobs won’t be coming back. They will be replaced by computers and robots, and that’s okay. Because this offers us the opportunity to guarantee the basic needs to everyone and strive to do what we do best: to spend 80% of our time creating and 20% of our time working.

If we can optimize and construct an economic model around abundance instead of scarcity, and get rid of “work” altogether, that’s even better.

This is extremely relevant to the way we are approaching and building the Hyperloop.

Abundance opposed to scarcity is a fundamental pillar of our design criteria. The goal here isn’t to create a company that makes tons of money—although that’s a terrific consequence. The overarching mission is a Call To Action at the planetary level to build a system that paves the way and builds the infrastructure for a next-generation economy. Not, “How do we get from LA to SF in less than an hour so I can take more meetings, work more, produce more, consume more,” etc.

In order to truly rebalance our economy, we have to confront the root of the issue. And that means redesigning human interaction at the ground level.

I realize I must sound like a lunatic who is out of his mind here, and that’s alright. We are identifying the path to arrive at an “abundance” model right now. And at the World Economic Forum, 50 of the top companies in the world are paying attention—all wanting the same results from different angles. And each day we can see, step by step, a clearer path forward.

This is a very important moment in history for humanity, and it’s up to us to unite and re-imagine the world as we know it.