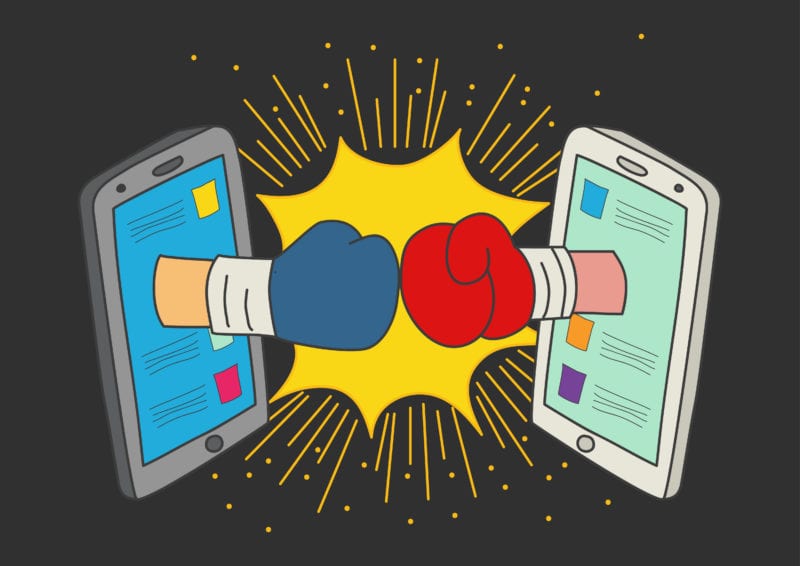 For brands and the people who bash them, Twitter is a conflicting place. Rife as it is with critics like Jon Hendren, “Brands Saying Bae,” and waves of “woke” marketing-leery millennials (plus their like-minded Generation Z counterparts), for brands, Twitter can be a tough crowd.

The Twitterverse is full of sharks like Hendren, all just waiting to call brands out on their corny, over-handed marketing tactics, their jokes glinting like sharp teeth. With every Tweet, you risk going viral for the wrong reasons.

From a branding and marketing standpoint, this is immensely problematic. Twitter is a platform too prominent to avoid entirely where backlash is seemingly inevitable. How do you approach marketing in an environment like that?

A perhaps more important question, though, is why does Twitter remain so notoriously brand-averse––especially in comparison to other major social media platforms?

Elsewhere, negativity can be swept under the rug. But on Twitter, there’s nowhere to hide from criticism.

When I served as the social media manager of a national beer brand, I was advised to use Facebook’s “hide” feature liberally. The save-face tool allowed us to sweep away all criticism and profanity without the commenter even being made aware. On Instagram, you can delete unfavorable comments. But on Twitter, there’s nowhere to hide from the mockery, jeering, and other forms of trolling.

Of course, this is a matter of function more than anything. But Twitter’s lack of a user censorship tool surely has something to do with Twitter’s cynical overall attitude, at least perceivably, or in that it’s attractive to people who may elsewhere have their comments deleted or hidden.

This considered, brands need to be especially careful about their Twitter messaging. Aside from deletion, there’s no way to stop the ensuing bleeding of a negatively received tweet once it begins.

2. Twitter is fairly young, generally well-informed, and a bit skeptical.

For M+GZ (a monstrosity of an acronym I just coined because Gen-Z is too often understated when discussing “millennial” matters and saying millennials plus Gen-Z is too much), Instagram is a place to pretend your life is picture-perfect, bright, and bubbly. Facebook is for playing it safe, wishing happy birthdays, and RSVPing to events if used at all.

But Twitter is a bold, speak-your-mind kind of place where MG+Z users consume news, comment on society and politics, and generally just commiserate. So on Twitter, overzealous, self-important brands incessantly vying for attention simply don’t fit in.

80% of Twitter users are millennials, according to Twitter. And as supported by the extensive eye-roll-inducing list of things millennials have allegedly killed, including chain restaurants like Applebee’s and Buffalo Wild Wings, diamonds, and—most relevant here—traditional marketing tactics, we’re a skeptical bunch, especially when it comes to embracing corporate enterprises. Or perhaps we’re just poor?

Those arguments don’t have to be mutually exclusive. It would make sense that part of the millennial distaste for brands stems from our awareness that brands really only want our money—something we have less of than previous generations, comparatively.

Or maybe we’re just jaded. We’ve been inundated by soulless, thinly veiled cash grab marketing our entire lives, after all. We simply see through it, and we’re sick of it.

Most likely, all of the above factors in.

This is why it’s unfair to call Hendren, Brands Saying Bae, and other brand critics “trolls” or “bullies.” They’re funny guys and girls, first and foremost. But they also have a belief-driven agenda; they’re fueled by a legitimate contempt for corporate America and work actively to tear it down tweet by mocking tweet. And the tweets of these brand-bashers garner thousands of likes for a reason: Swathes of millennials and Gen-Z share their resentment for disingenuous corporations and their marketing strategies.

Hendren’s been at it for a while now. In a 2013 Forbes article, he said: “Not to get all Banksy on you, but I really believe companies engaging in marketing stunts and whatnot deserve to have their efforts exploited. It’s obnoxious. Nobody’s going to buy one brand of chlorine bleach over another because one of them posted a “Fill in the blank: ___ is my favorite TV show!” tweet.”

3. Your brand isn’t “authentic” enough for Twitter and millennials.

As consumers become more marketing-sensitive, most marketing experts advocate for a push toward “authenticity.”

And “authentic” is an incredibly vague term anyway.

And to Sunny D, it means being depressed.

Strangely sentient brands like Sunny D, Arby’s, MoonPie, Denny’s, Wendy’s, and Steak-Umm have taken an “if you can’t beat ‘em, join ‘em” approach to resonating with young people on Twitter. The general goal behind the infamous social media strategies of these ill-advised brands is to be funny, relatable, and “authentic” by using millennial language and memes (Denny’s and Arby’s), being witty and argumentative (Wendy’s), or engaging in weird, nihilist, surrealist humor (the other three). The latter, as noted in this 2017 Washington Post piece, is exceedingly popular with M+GZ (yeah, I’m really doing this).

At this point, “authentic” is little more than an all-encompassing buzzword we use to tip-toe around a harsh truth: Corporate marketing, as we know it, is broken.

Millennials and the forthcoming adults we’ve unceremoniously dubbed Gen Z aren’t interested in your brand’s “voice.” So instead, level with us. Be transparent. Reveal the humans and values and true, impactful intentions behind your company. One of the best ways to accomplish all of these things is by telling compelling, genuine brand stories through thought leadership.

Young people—especially the well-informed, opinionated, aware, sometimes cynical types who flock to Twitter to talk about the very issues created in part by corporate America—aren’t going to pretend marketing is something it’s not.