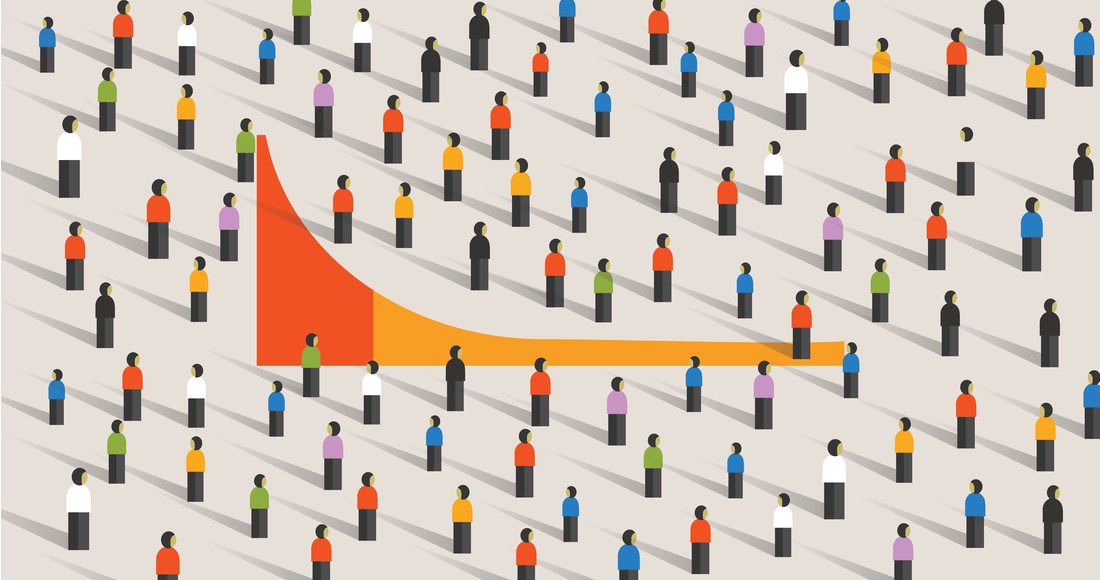 How is it possible that, in an age of digital and global economies, the 80 percent is responsible for generating the most value—and yet, in reality, all the value (money) generated goes to the 1 percent?

The current model for the world’s economy doesn’t work.

I’ve written about this before as it relates to the concept of sustainability, but there’s a different way of looking at how economies function I believe is necessary to talk about: how value is currently distributed across humanity, and how we may be able to redistribute this value differently and more effectively.

Before the year 2000—before the internet truly became part of the fabric of the global economy—the entire economic system was based on something that was elaborated on at the beginning of the century by esteemed economist, Vilfredo Pareto, called the Pareto Principle. He was performing an analysis and realized that 80% of Switzerland’s wealth belonged to only 20% of the population. This became the seedling of an idea that most things in life are not distributed evenly—and has since been applied to everything from productivity habits to goods that drive revenue for a business.

For example, if you go into a physical location of a shop today, you might not notice right away that 20 percent of the goods exposed are most likely responsible for 80 percent of the revenue generated. Knowing this, the owner of the shop will then position his or her goods in a way so the goods within that 20 percent are front and center for customers—because that’s what’s going to keep the business alive and running.

The Pareto Principle would say to “double down” on what’s working and ignore the rest.

But then, in 2004, a very interesting article was published that built on top of the Pareto Principle, pushing it forward.

It was titled The Long Tail by Chris Anderson, who was the former Editor-In-Chief of WIRED. In the article (which later became a book titled The Long Tail: Why The Future Of Business Is Selling Less Of More), Anderson noticed something that was completely novel. He said that the Pareto Principle was good, but not perfect, because it didn’t take into consideration the exponential development of intellect. Using Amazon as an example, he pointed out that if you look at the distribution of books sold by Amazon, you’ll notice a seismic shift that changed in our economy. If you put all the books that were sold by top-tier authors from Dan Brown to Agatha Christie together, you’ll notice how little of an impact they make when you take the “long tail” into account. Even if Dan Brown sold $100 million in books, when you put that number on the curve of all the books distributed by Amazon in a year, it’s nearly inconsequential. Dan Brown selling or not selling books through Amazon wouldn’t impact Amazon in the slightest.

What does this mean?

This means the entire business of a company like Amazon (and others like Netflix, Spotify, and so on) is in the sum of the niches. Amazon isn’t successful because they have 10 best-selling authors publishing through their platform. Amazon is successful because they are selling 20 books here, 30 books there, multiplied by an unfathomable amount of authors and publishers where together they create 80 percent of the value and revenue generated.

This is incredible because it completely changes the way we can and should think about building economies for all of humanity.

How is it possible that, in an age of digital and global economies, the 80 percent is responsible for generating the most value—and yet, in reality, all the value (money) generated goes to the 1 percent? It doesn’t make any sense. And not only does it not make sense, it’s actually creating giant imbalances that exacerbate the problems we already have in our economy.

If I’m Amazon, I don’t care if Dan Brown uses or doesn’t use my platform. If Dan Brown says, “I’m going to pull my catalog,” what’s the actual economical impact to Amazon? Almost nothing. It might be a big number in and of itself, but in the context of Amazon’s entire distribution volume, it’s inconsequential. Which is why Amazon cares more about the 80 percent—the small businesses and the independent authors each selling 20 or 30 books—because the 80 percent generates 80 percent of the value for the company.

For Amazon, this is great.

But for everyone else, it’s a huge problem.

Societies and strong economies are built on the efficiency of value redistribution. So by creating digital engines that move us further and further away from any sort of truly shared value, we are only widening the gap between those who provide the most value and those who profit—until eventually, it’s not unfathomable to imagine a world where 99% of humanity generates 99% of the value, and yet only 1% truly benefit.

Which is why, now more than ever, we need to redesign the rules of our economies from ground zero. And we need to do so at the highest levels possible by using platforms like the World Economic Forum to speak openly about the problems we are facing together, so that the next generation can take this new information and apply it.

Otherwise, the “long tail” will only get longer.

For The First Time In History, Entrepreneurs Have To Start Thinking At A Planetary Level. Here’s How We’re Doing That With The Hyperloop